Sunday 9 June –   beautiful sunny day.  We left before 10 o’clock, heading to Charleston.  It  rained so hard last night – it kept me awake. Lots of puddles and mud on our site.

We got to Lake Aire RV park outside of Charleston, South Carolina about 2:30 p.m. . The lady took some time checking us in as she was new to the job.  She told me $56 tonight but their website clearly said 46 plus a Good Sam discount.  We more or less got that sorted out and then she told us to take site number L3.  We drove over to see it; it’s a very small site and lots of trees. But when we pulled up, there was also a nonstop barking dog at the next site. We made a list of other empty sites on our way back to the office.  We wanted another site.  We normally just take what we get, but we cannot stand barking dogs.  And we do not blame the dogs.  So, we were given a new site, L13 so we set up there.  We could still hear the dog but it wasn’t as loud.  We picked a nice site though, we were right beside a river and there was lots of these cool ducks around. I think they are called Muskovy ducks.

We got set up quick and then headed out as it was later in the day by now.  We drove to CAW CAW Interpretive Centre and walked for about 2 hours. We saw some little geckos all along the trails.  Other people saw alligators and there were also cottonmouth snakes there. I’m kind of glad we didn’t see any snakes are alligators.   This is a pretty cool place.  I was ever watchful as we don’t have alligators or cottonmouth snakes where we live.  We only have very mean Canada Geese and Red Squirrels.  I’ve been chased by both.   Just as we got in our car to leave the wildlife sanctuary, it started pouring rain so I think it’s going to be a nasty night. 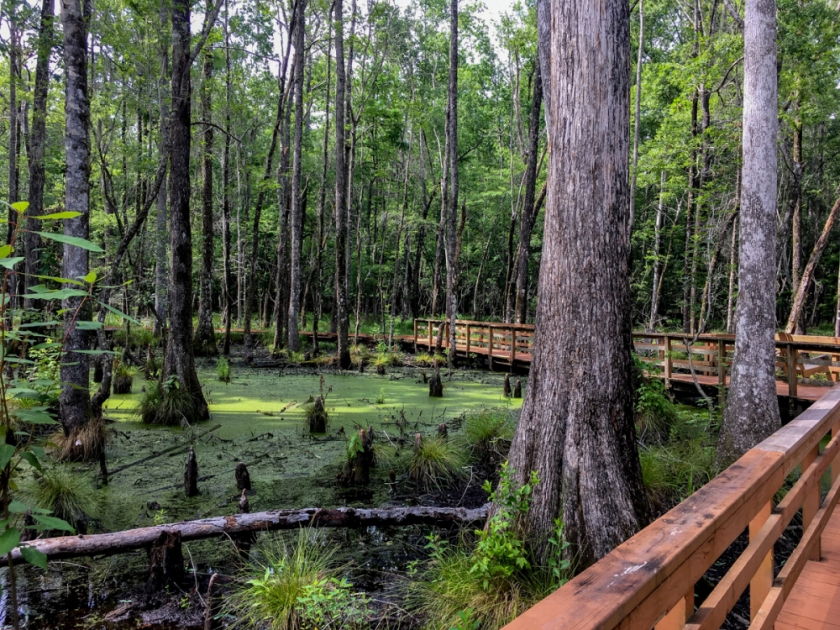 Monday 10 June –  30 Celsius and sunny. We headed off to Patriot Point. We had stopped at the Fort Sumter ticket office to get tickets for the ferry.  The ferry takes you over to Fort Sumter, but we would have to wait, so we decided to drive to Patriots Point and tour the USS Yorktown.   The USS Yorktown was known in WWII as the “Fighting Lady”.  She received 11 battle stars for service in WWII.  In the 1950’s, she was modernized, designated as an anti-submarine aircraft carrier,  and was used in the Vietnam War.  She also was involved in the recovery of the Apollo 8 astronauts and capsule in December 1968.    The ship is huge. 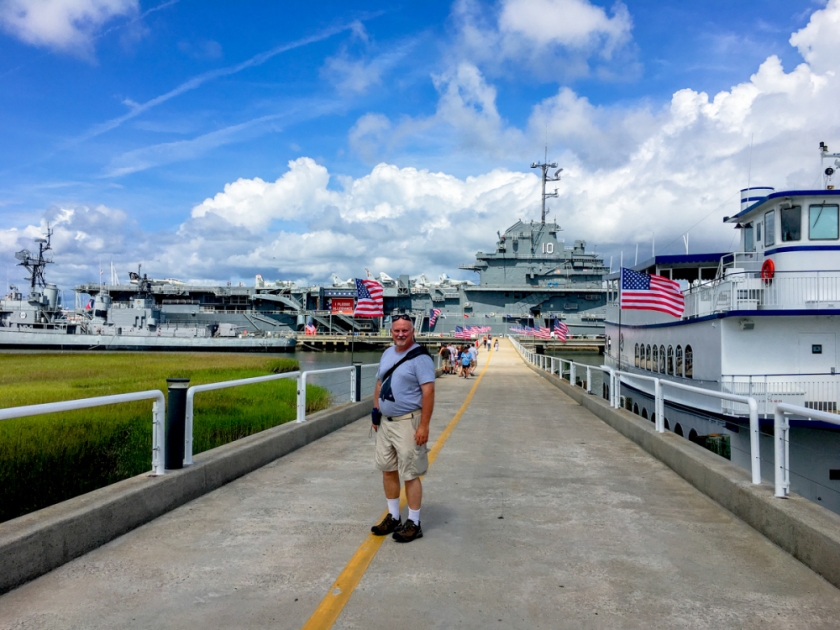 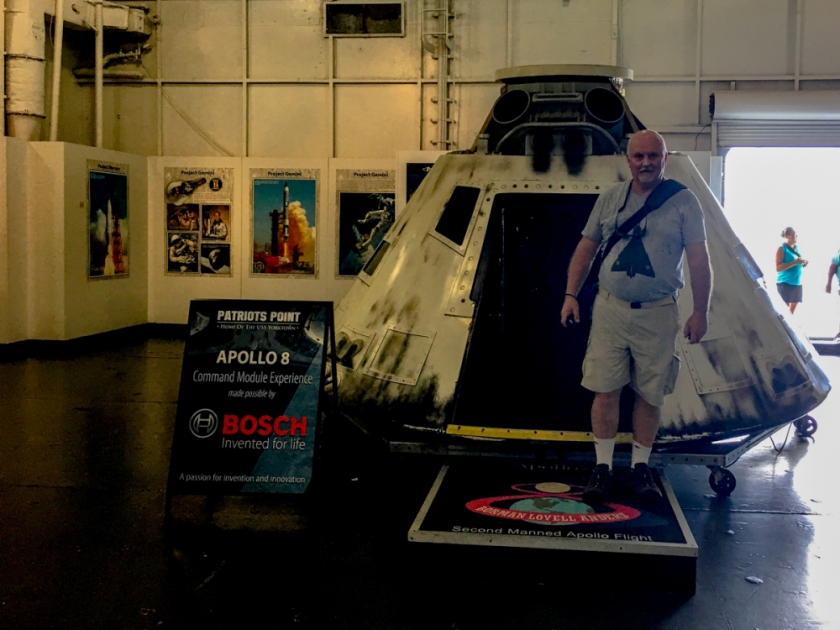 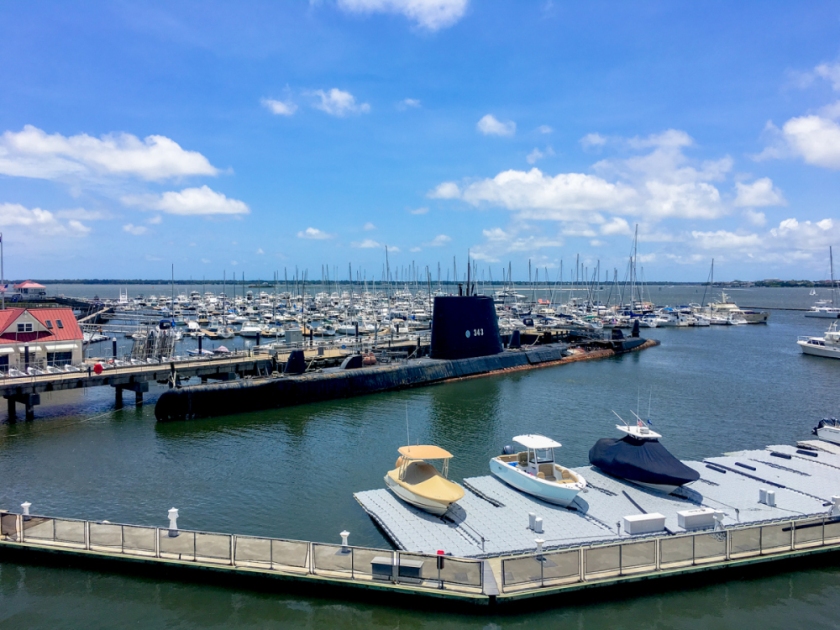 Some of the points of interest on the ship include;  the Museum of Medal of Honour recipients, a movie theater, and tons of planes.

After we  stopped at the little café on the ship to get a bite to eat, we walked over to the  USS Laffey Destroyer and toured it and then to a submarine, USS Clagamore,  to tour that as well.  Total cost is $22 each to do all this.  Pretty good deal I’d say ! 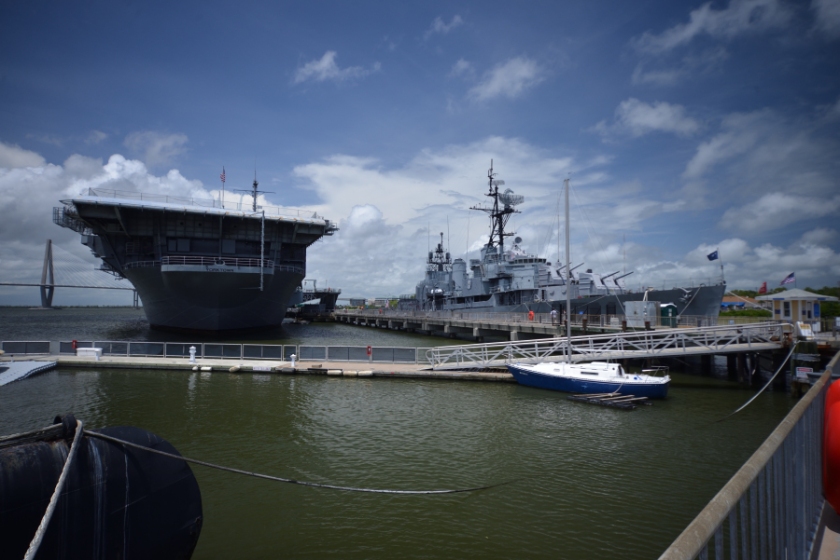 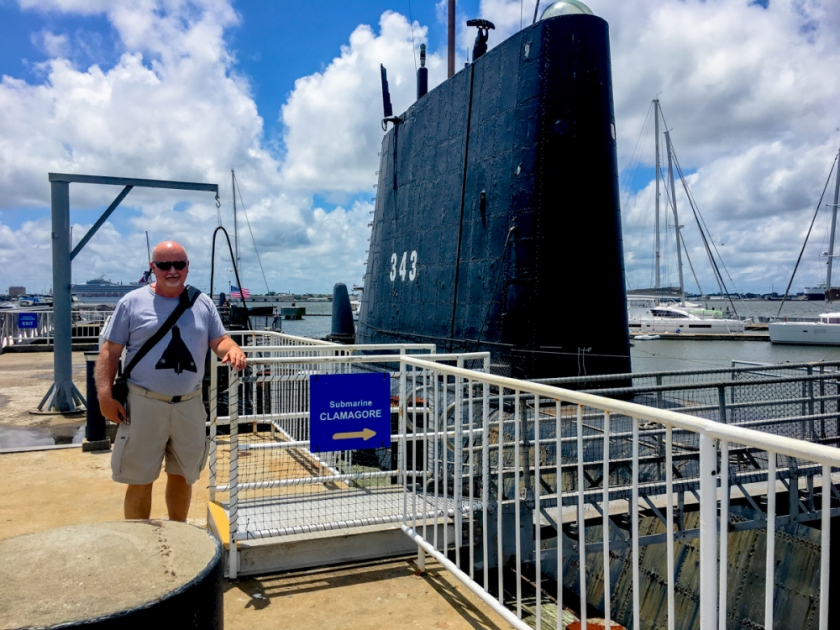 They also had a wonderful outdoor Vietnam experience, it was awesome. They had all kinds of outdoor displays including helicopters, buildings;  all well staged. They had a building with a small theatre showing a movie so we watched it and the movie was not so great but really good music accompanied it. We spent close to five hours touring this display and the ships and submarine. Terrific place. 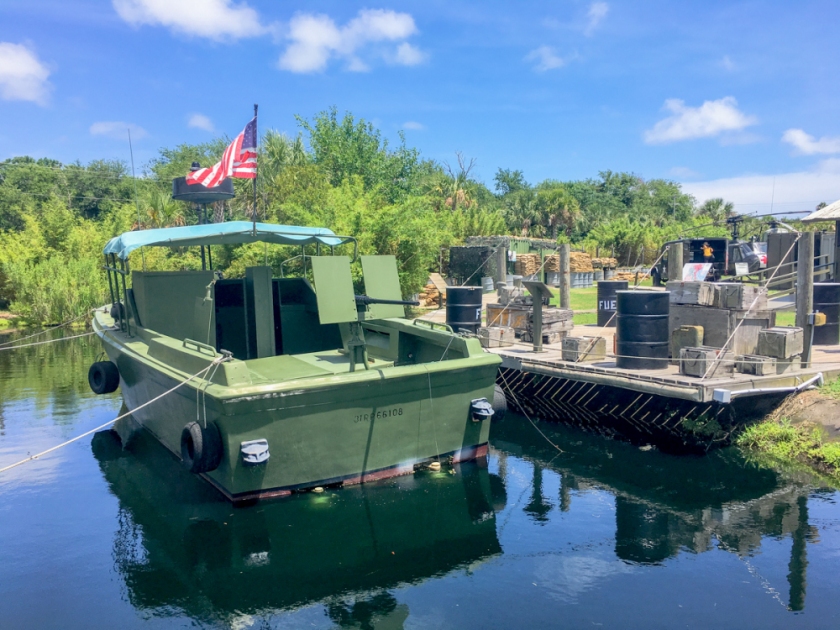 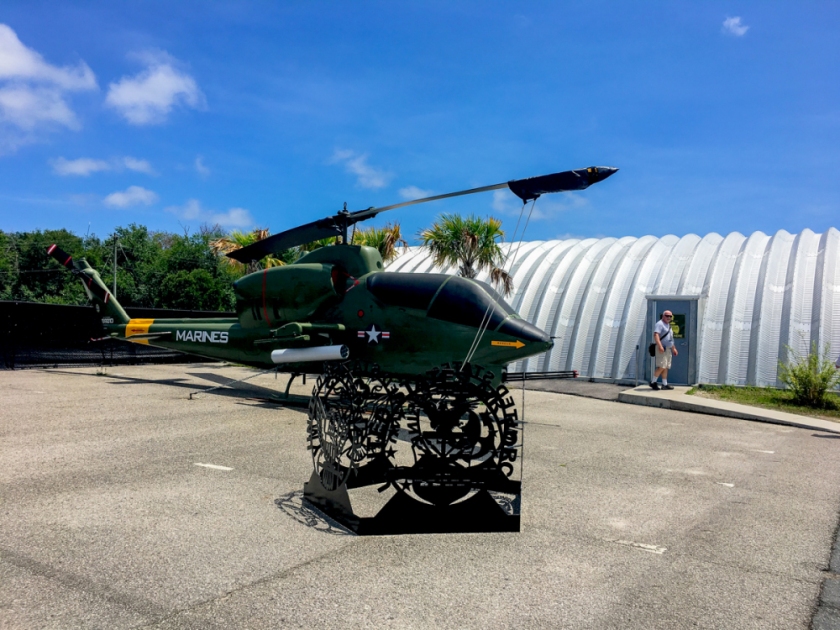 Then we drove to the Boone Plantation and it cost approximately $20 each person for the house tour but we only saw three rooms.   That was rather disappointing.  We saw the library, dining room and sunroom. A family still lives in the rest of it which kind of sucked as it would have been nice to see more.  However, most of these plantations are not original, or even close to being the second house, on these properties.   We were able to take a wagon ride around the property and have a guided talk about the property which was interesting.  The photo below is a spot on the property, pretty funny.

Then we went over by the slave cabins and a woman talked to us about the slave cabins and life on the plantation. We toured through all the eight original small cabins.  Each cabin was made of brick and each was a museum, except the last cabin, which was a small playhouse. 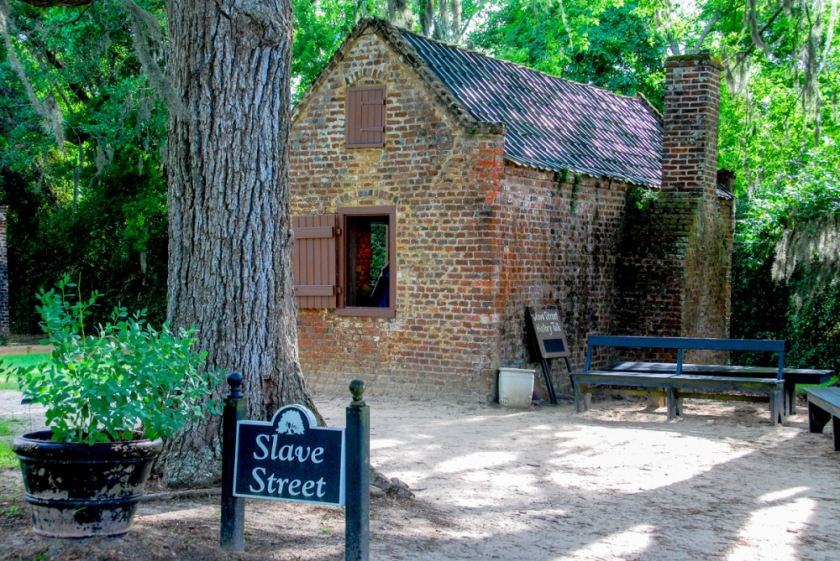 The main house was built in 1931 and is the fourth house on this property. They have a wonderful 500-year-old Oak tree in front of the house. Secretariat and two other famous horses came from a horse on this farm, he was their grandfather. Very interesting place.

We left there and stopped at Ghost Monkey Brewery on the way home. We got a growler of their double hop IPA. We sat at the bar and chatted with Dave, a retired schoolteacher, who works there part time.  We had a lot of fun there and Dave thought Trum was pretty cool.

Tuesday 11 June –  sunny. Got up and left early to catch the 930 ferry to Fort Sumter.   We had to pay six dollars total to park in the underground parking and then we walked over to the ferry terminal. The fort was free but we had to pay for the ferry. It was $21 each to take the ferry, there and back.   We sat on the top level of the ferry, there were three levels with about 450 people. It took about 30 minutes to get there. I sat by a woman from Wisconsin who went to school in Toronto. You never know who you’ll get talking to.  We got to the Fort and we were told it is very old and has the original cannons. The Union soldiers had it and then the Confederates took it from them. Apparently this was the location of the start of the Civil War. 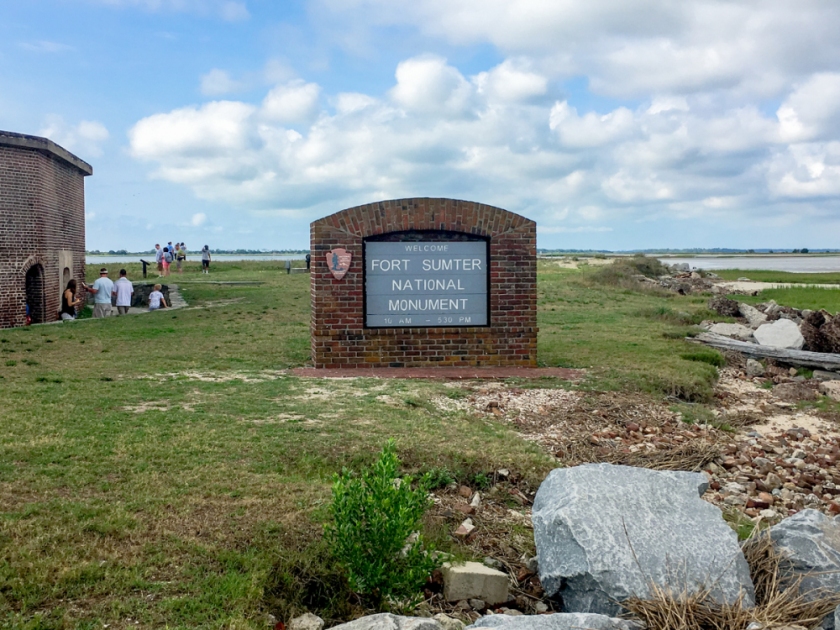 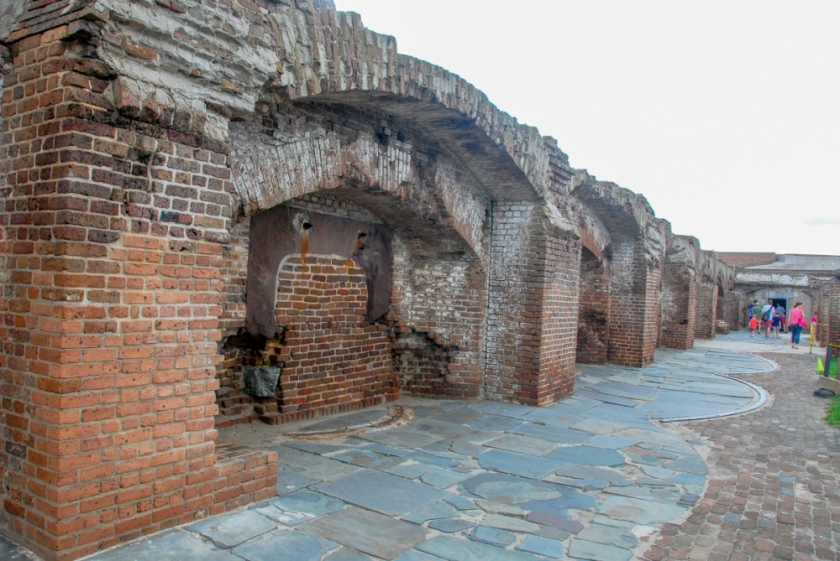 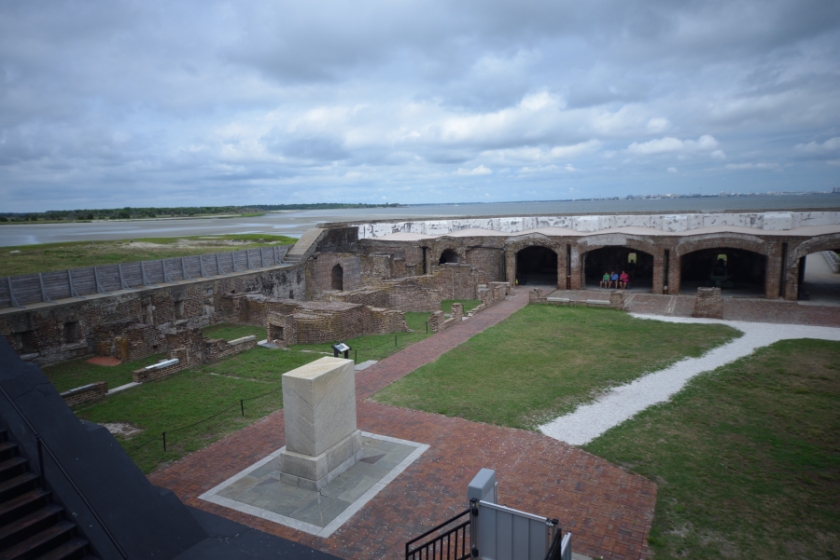 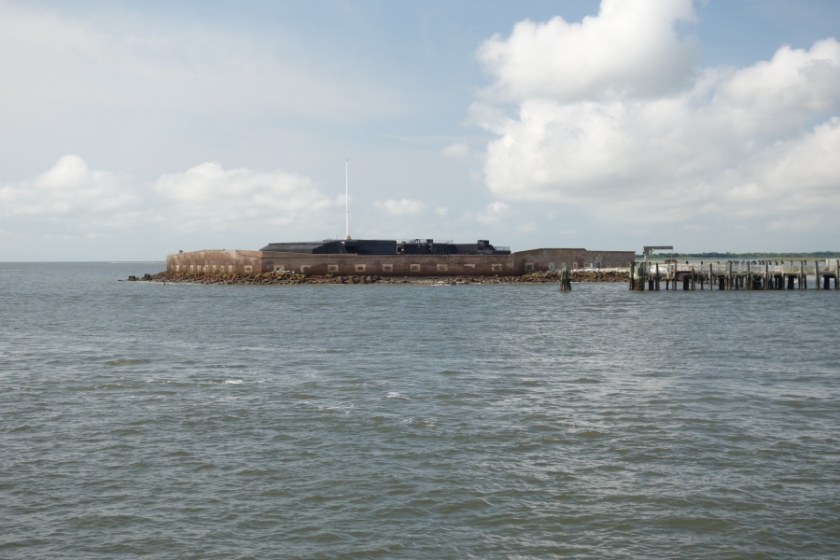 It took us half an hour to get back to the ferry terminal.  We left there and went to the old downtown area and parked.  We walked all through the Charleston City Market in the downtown core, which is now turned into an artsy market. We didn’t purchase anything.

Then we walked over to an old church but was all closed up. We passed a Forrest Gump restaurant and sat and had a beer outside at the bar. It’s a very cool restaurant and before we left we toured the upstairs and downstairs. 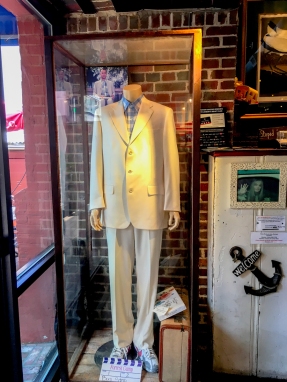 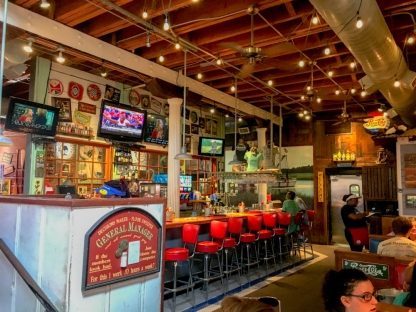 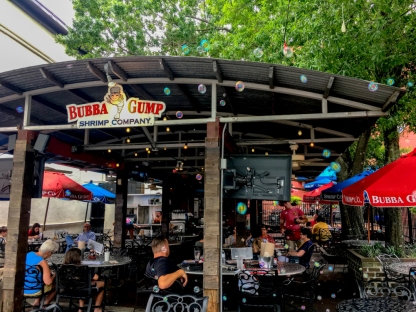 We thought we would take a drive down Ashley River Road to see the plantations, Magnolia, Drayton and Middleton. Very expensive, for example it was $52 each to tour the Magnolia so we are going to pass. We headed home and as we drove, it started to rain.  We are supposed to get a lot of rain the next day or so, 50 to 75 mm.

Next we are heading to Savannah, Georgia !