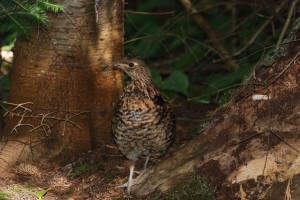 Rabbit Blanket Campground, not sure where the name came from but it is a nice campground.  Sites are more private and treed.  But it is not on Lake Superior and there are no sandy beaches.  There is a Rabbit Blanket Lake for paddling.

This park has more traditional sites.  A little more privacy.  We had site 18 which was a nice site.  They have trails behind each campsite to go for water so it seemed there were always people walking in behind us but you get used to it.

We drove into Wawa; this appears to me to be a very depressed area.  Lots of businesses and houses for sale.  This is the home of the Big Canada Goose.  We drove around this area, Silver Falls and Government Docks.  Worth the drives.  And I can’t believe it but we ended up eating out two nights here.  Normally we just make and have dinner at our trailer but we saw a sign for German food.  The Best Northern restaurant   It’s also a motel but we wanted to try the restaurant.  Great food – Borscht soup, Dill Pickle soup, potato pancakes, stew, cabbage rolls, Pavlova for dessert.  The man looking after us was very nice and all in all, a lovely evening.  Couple of days later we stopped for dinner at the Kinniwabi Pines restaurant, pretty much right next door to the Best Northern restaurant.  They had great food also; Asian, Caribbean, Indian, lots of choices.

We drove to Gargantua Harbour .  Wow that’s quite the road to get into the harbour.  About 14 km of bumps, potholes and rocks.  But we did see lots of grouse and a hawk !  We spent some time walking along the shoreline. There was an old dirt road you could walk to go around the harbour.  It took you to an old Interior Ranger Cabin.  We saw a tree with an old ax stuck in it and of course the old outhouse, with no door…….

One part of the trail was flooded, beavers at work again, so we couldn’t do as much as we would have liked.

We drove to Mijuemsangshim Lake and hiked to view that lake. One afternoon, we had a grouse and her young one come right into our site.  So cute the little one was.  We watched them for quite some time.

Also did the South Old Woman River trail – this trail will test you !  It’s not a long trail but you really had to pay attention.  I have some photos somewhere, I will have to put some up.  Crazy trail !