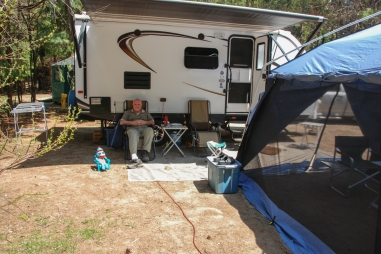 Algonquin Park in May, hmmm !  Other than day trips, we have never camped at the park in May.  We always stay in June for 2-3 weeks.  This year something different……..next year back to the old ways.  The month of May had the benefit of no bugs…….i.e. blackflies but other than that, May sucked !  We stayed in Mew Lake campground on site 63 which is a water site right on the beach.  It was an okay site but because this May trip was so windy probably not the choice to be on the water.

We were able to do some trails/portages and not be “bug bothered”.  We did not see as much wildlife as we normally do in June so that was a big negative for me.  We saw a couple of hawks and I did get some photos of one that turned out pretty good.  There were a few Canada Geese families around; on Mew Lake and Whitefish Lake.  The goslings were pretty tiny and cute – little balls of yellow fluff.  We only saw one heron but we did see some mergansers and other ducks.  We were told there would be lots of moose to see in May but I think the moose should have been told.  We saw the same one twice on Arowhon Rd and one on the highway. The one on the highway literally ran for his life when we stopped the truck and got out.  Very very skittish.  Not normal for a moose, they usually keep doing whatever they are doing and don’t pay any attention to what the humans are doing.  We also saw a couple of grouse but that’s about it.  Pretty quiet on the wildlife front. 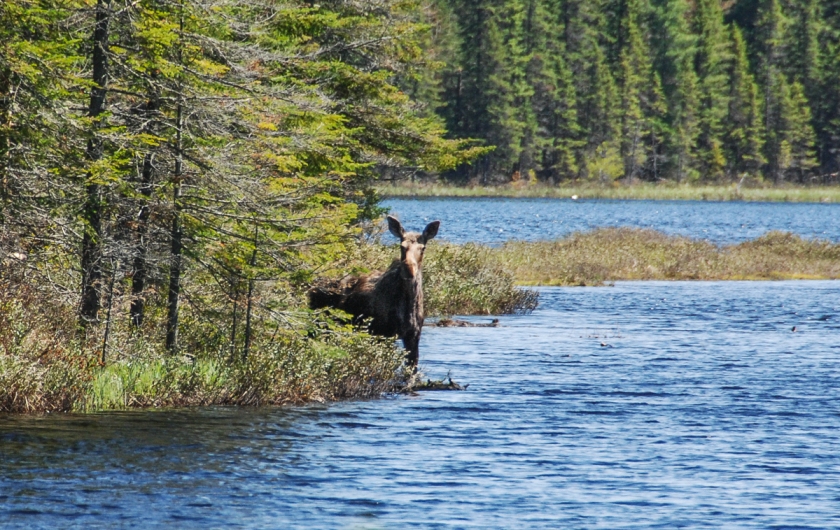 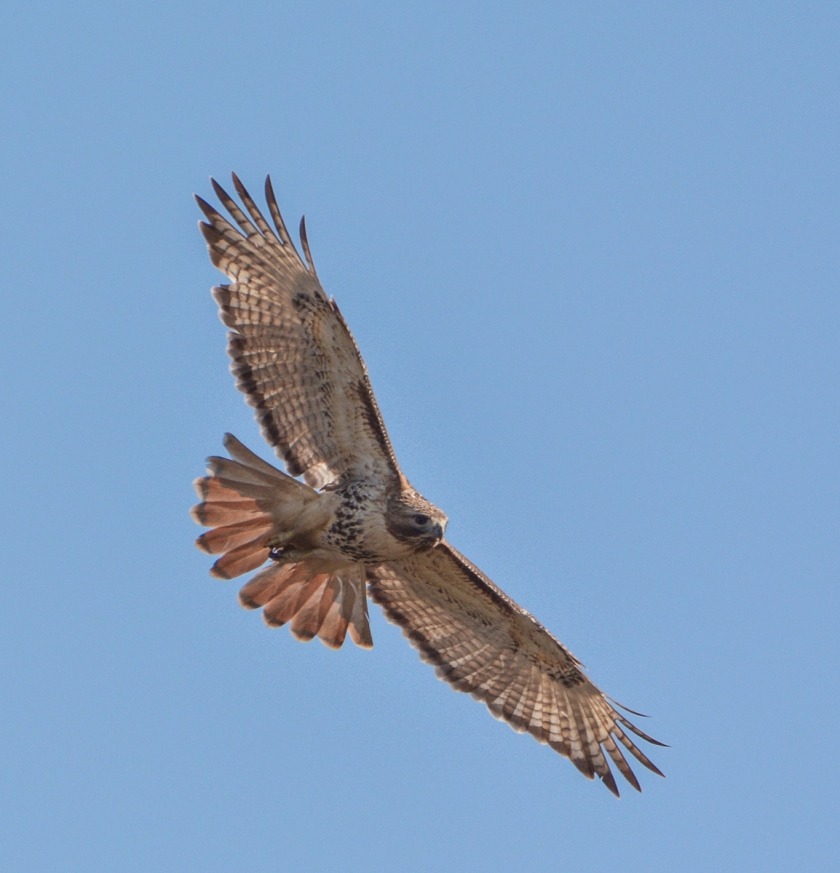 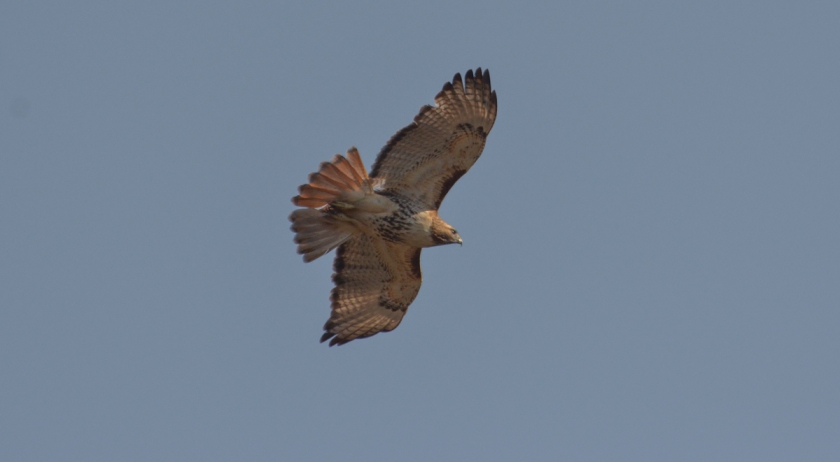 We walked down part of the Mizzy Lake trail to the ponds area.  We also did a bunch of portage trails and it was nice to see all the white and red trilliums around.  When we come in June, there aren’t any at all.  The woods were quite open, not a lot of leaves on the trees yet and you can see for a long way.  Lots of snakes were out, much to Clint’s dismay. lol  Most of the lakes and rivers were about normal but some were higher.  Opeongo Lake was high and in fact, the new docks they put in were under water.  Whiskey Rapids trail was closed due to flooding and the two Backpacking trails were closed but by the time we left, they had opened them.  Minissing bike trail was also gated off. 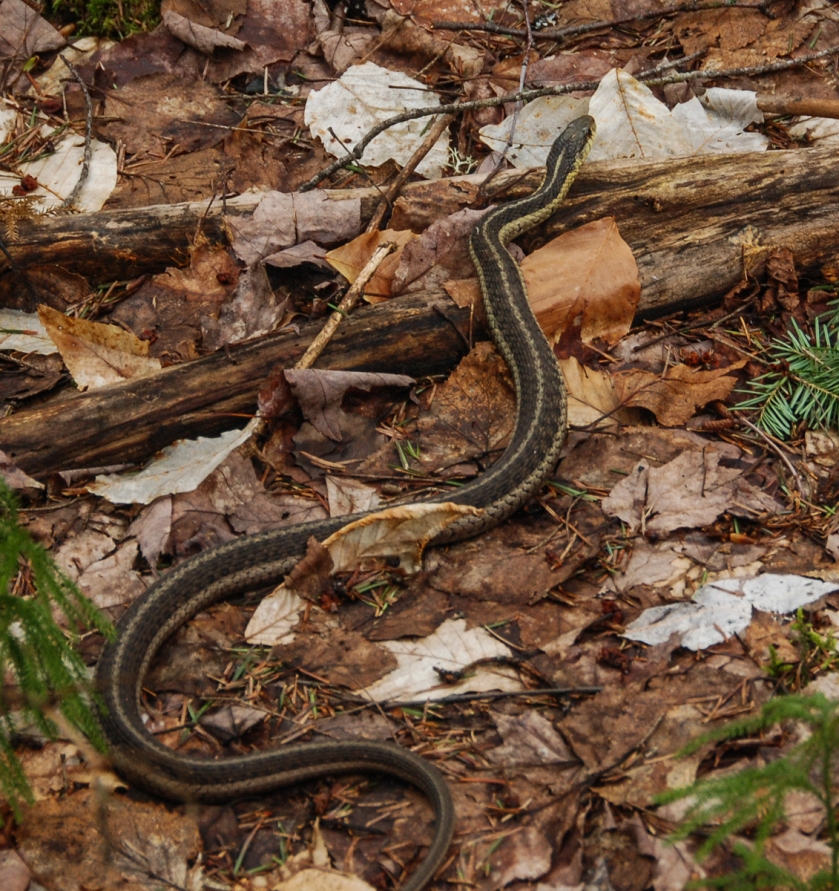 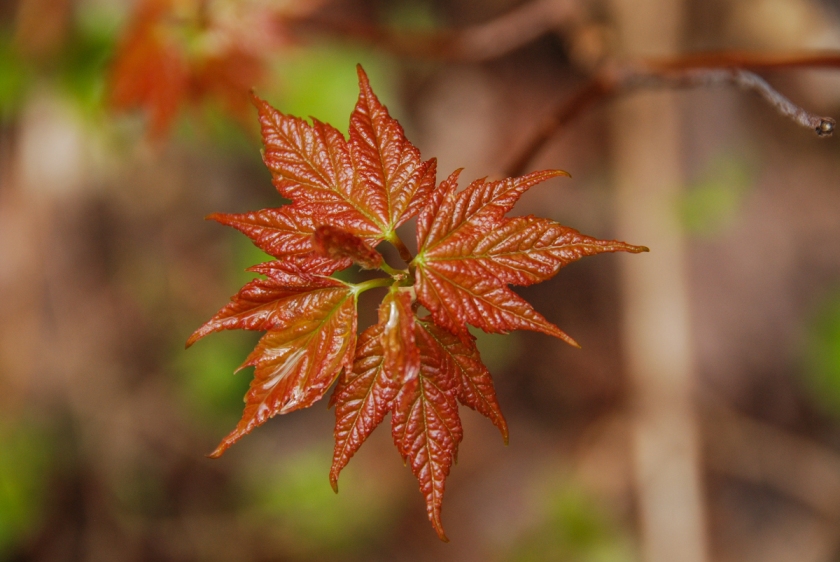 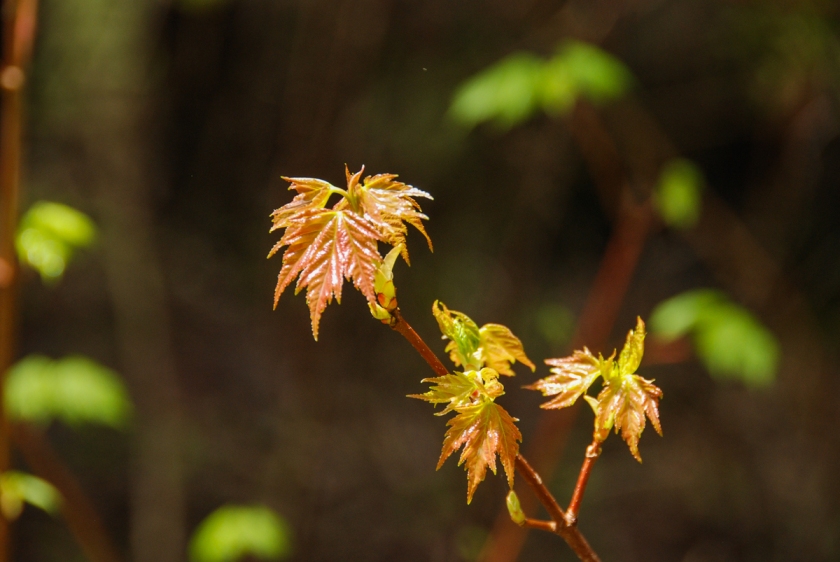 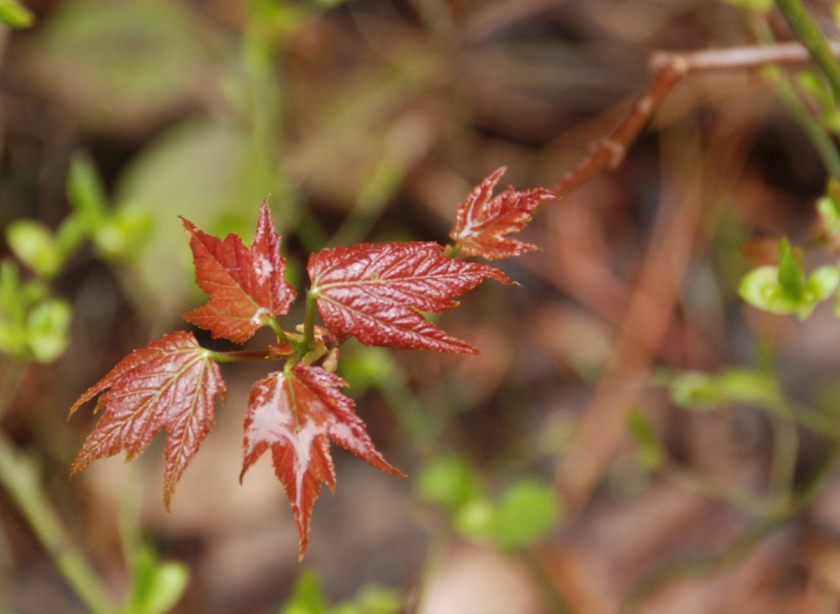 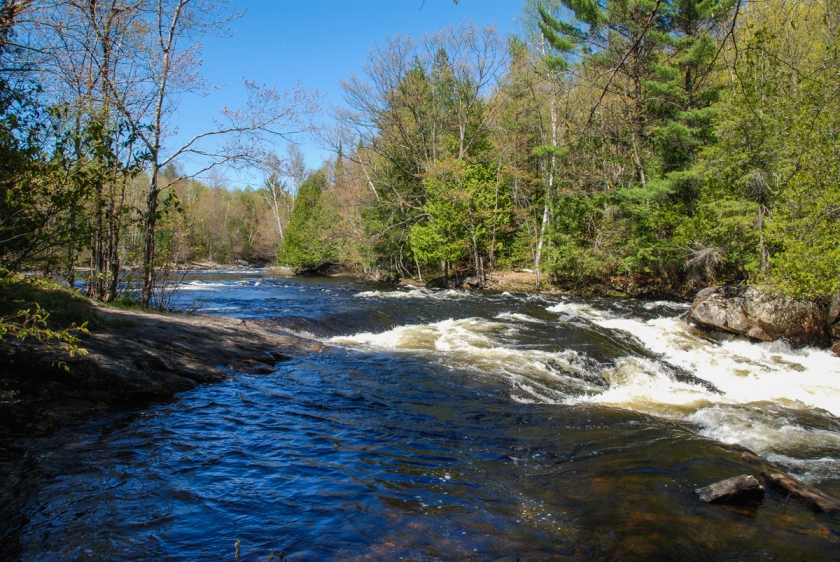 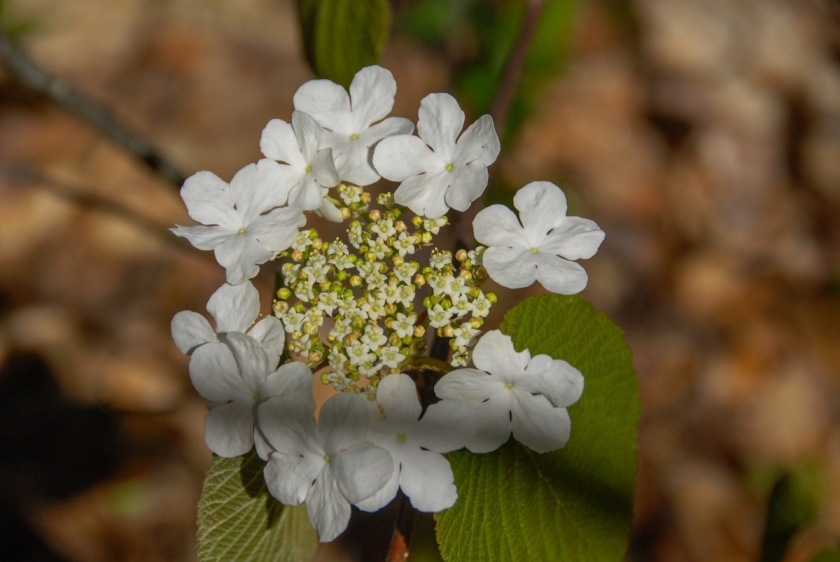 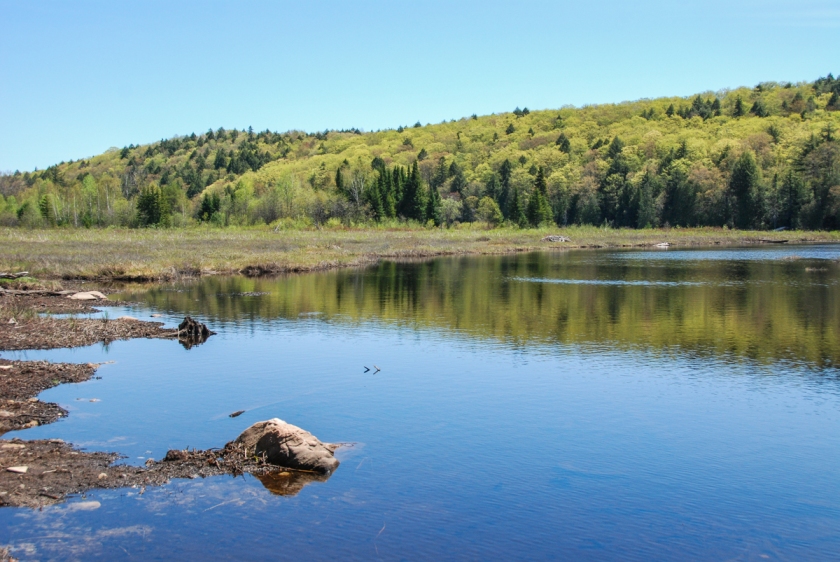 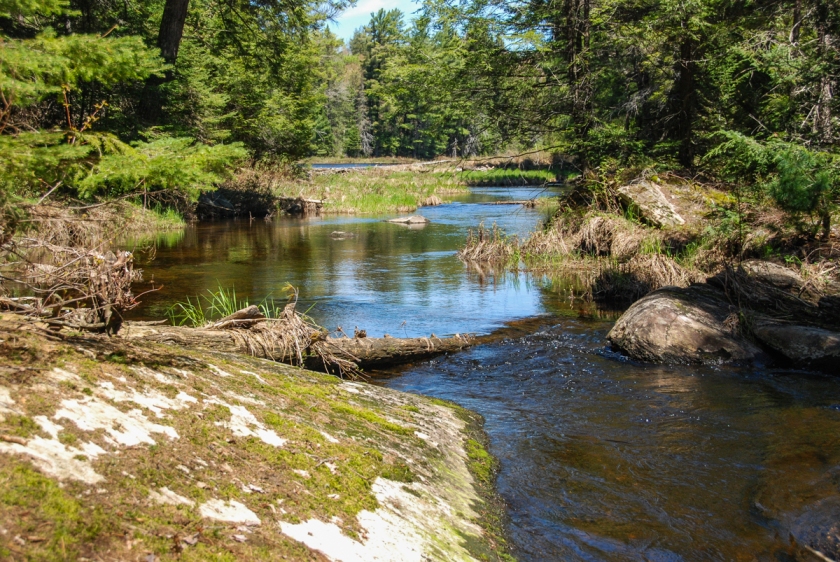 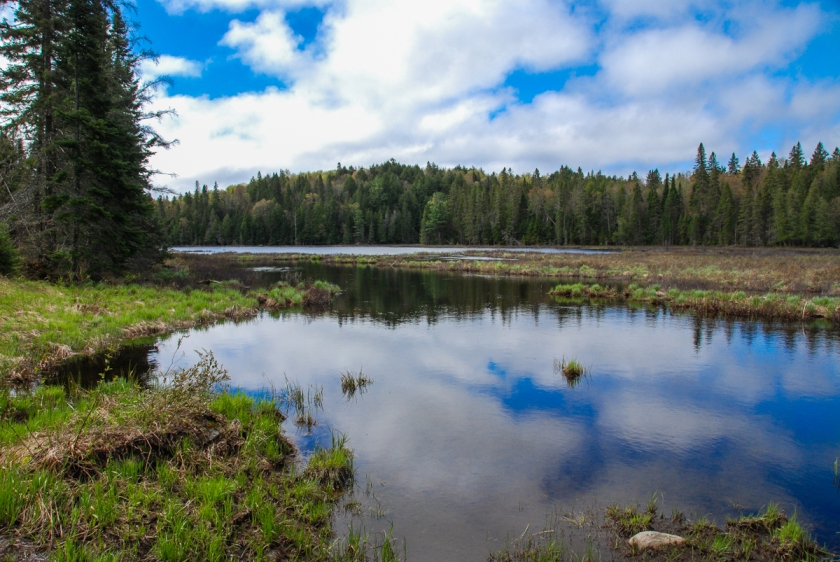 On Thursday 18 May, a wicked storm went through the Park.  We had hiked a lot that day and it was hot, 29 celsius so when we returned to our campsite we put our chairs in the water and sat there in shorts and t-shirts.  About 430 pm the wind was out of control and it started to rain and by rain, I actually mean a torrential downpour !   Crazy crazy winds though and 90 minutes later when it stopped, the temperature had dropped to 3 Celsius.  How is that even possible? lol  Time for touques and coats !! Hard to pack for May in Canada, long johns, shorts, mittens and bathing suits !  And yes there were people swimming in the lake pretty much every day we were there.  And some days I didn’t think it was humanly possible to survive a swim in the lake as it was so cold and windy.

We drove around the campgrounds the next day and there was a lot of damage and a lot of trees down.  We had been told a girl had her leg broken when a tree fell on her; she must have been in a tent?  Three sites down a tree fell on a truck and they moved the people/truck/trailer to another site.  In Lake of Two Rivers campgrounds there were a couple of sites together (and thankfully no one was camping on them) and there were trees down all over the sites and road.  One tree had fallen onto a picnic table and busted it in two.  We drove to the west end of the Park and on the way back there was a helicopter flying straight down the middle of the road following the yellow centre lines.  Well obviously not ON the road !  but hovering slowly just above it.  My husband said they were probably looking for damages in general and damaged power lines.  We did lose our power for a couple of hours.

Paddling was not going to be fun, we are experienced canoeists but every single body of water had wind conditions/whitecaps.  We like to enjoy our experience and float around close to shore taking photos; fighting the wind for fun wasn’t on the agenda !  Its difficult to take photographs when you are being blown here and there.  There were a few people canoeing and if thats all you wanted, it wouldn’t have been a problem.

Trum got in on a few hikes and enjoyed his time at the campsite.  We were always worried he would get taken away by a squirrel.  Those critters are bonkers. 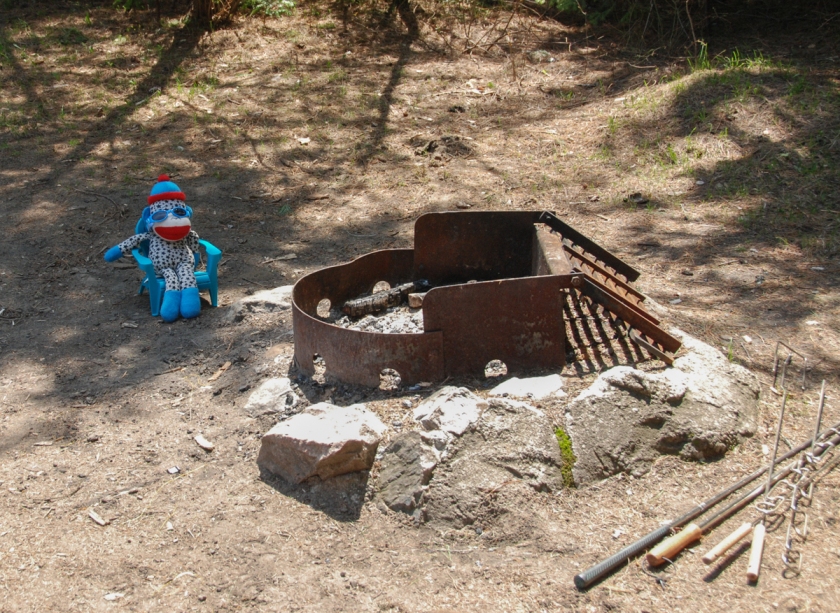 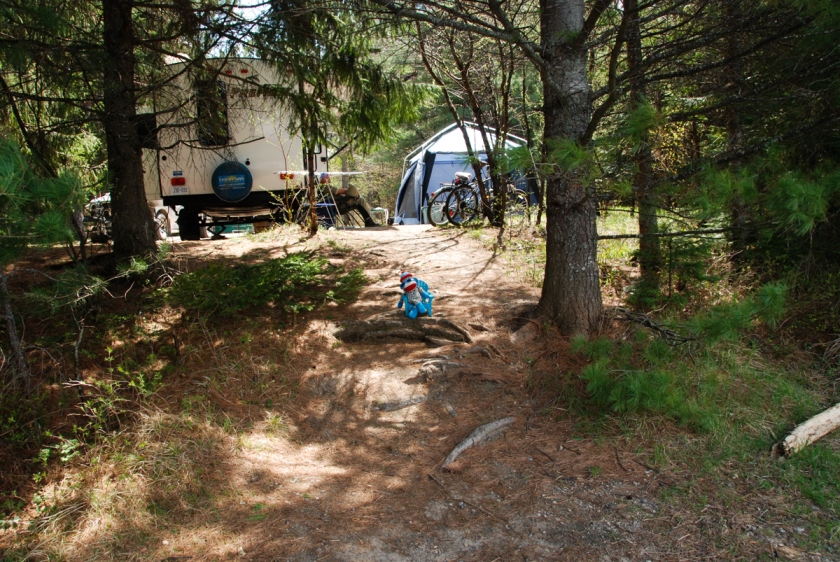 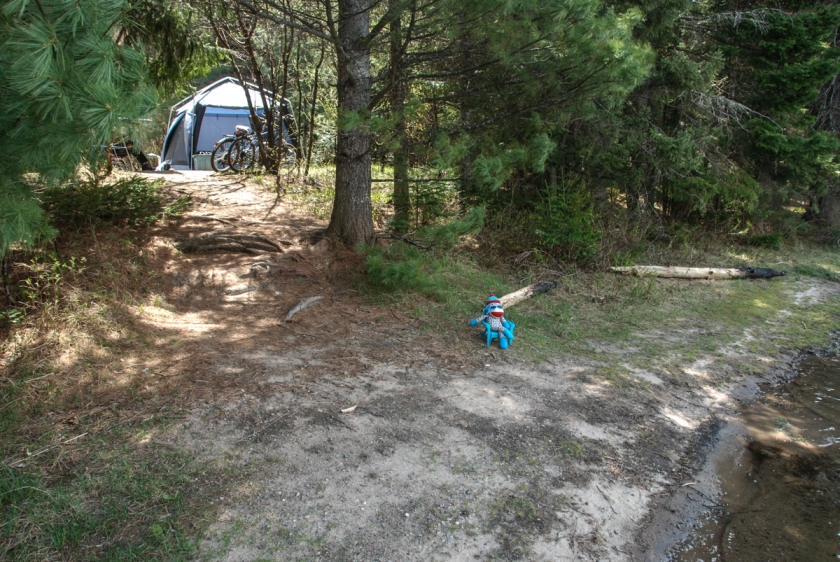