So we headed out to do an Interior Canoe trip or Back Country trip or holy cow you’re crazy trip……..whatever you want to call it.  We were up and out of our house by 615 am and drove to Algonquin Park to the Smoke Lake parking lot.  We unloaded the canoe and all our gear from the truck; loaded it all into the canoe and we were on the water and away by 9:50 a.m.

I love Algonquin Park.  This park was established in 1893 and it is Canada’s oldest Provincial park.  It is about 7,653 square kilometres in size and if you want a comparison, well, it’s the size of Prince Edward Island.  There are over 2,400 lakes and approximately 1,200 kilometres of streams and rivers in the park. We have paddled on a number of lakes and rivers but Smoke Lake is not one of them.

Smoke Lake is not a nice lake.  Yes it’s pretty but it’s long and there are lots of bays and it is the windiest lake I have ever been on.   We were paddling into the wind, not recommended if you can help it lol.   We went down the centre of Smoke Lake and about 2/3 of the way to the portage, there was a section that was almost like a whirlpool of waves.  They were coming at the canoe from front to back and side to side.  Reminded me of the currents at Point Pelee.

It felt like a long time but in reality we were only paddling about an hour and twenty minutes and then we hit the portage into Ragged Lake.   A nice landing, room for a few canoes at a time and as this is a busy area, that’s a good thing.  This portage was not long, maybe 260 metres but it was very steep.  It didn’t take us long to pack our stuff out to the other side though.  I do wish they would fix one small section of the trail, probably the steepest portion and only a few feet, but it has washed out and is literally just a sheen of mud.  Can be dangerous if you aren’t paying attention.  I did two portages and Clint had to do three.  Yes we take a lot…………Yes we know we can downsize…………Yes we like what we take…………No I’m not leaving my lawn chairs, books or wine at home.

We got to the landing at Ragged Lake and it’s right beside an old dam where there used to be a logging chute many years ago.

Ragged Lake was also pretty windy and we had a lot of white caps on the lake.  We had never been here before so we didn’t know how long it would take to paddle to Parkside Bay (part of Ragged Lake but under a different reservation).  Clint figured about 6 km paddling.  We left the Ragged Lake landing at 1250 and arrived at Parkside Bay exactly 2 hours later.  It was a rough time, the wind and waves were ridiculous.

We entered the Bay and there was a campsite on either side but as we went further and turned to the right there was a nice campsite right on a point.  Beautiful landing, quite large with a sandy beach and it’s fair share of rocks.   We took it, that was it, I had enough of paddling and maybe we could have gotten a nicer site, maybe not.  As it was, just after we unloaded our canoe we decided to sit on OUR LAWN CHAIRS on the beach and take a break before setting up camp.  I don’t know how many canoes went past but before you knew it, I’m sure the sites were all taken.

There was a steep little climb to get from the beach to our actual site but once up there the site was spacious and a nice flat area behind and to the left of the fire pit to put up our tent.  We put a tarp over our tent, we haven’t had any problems with our little tent leaking but we aren’t taking any chances. It’s easier to take 10 minutes in the nice weather than take an hour in the dark and/or rain. We also tarped an area over our “kitchen” area for somewhere to sit when it rains.  Notice I didn’t say IF it rains, we know it’s going to.    Clint left me to set up our “kitchen”  which consisted of a log nailed between two trees to use as a table.   He went further away from our site and set up the pulley system to hang our Bear Proof Food Barrel up in the trees.

By the time we finished setting up our camp, we made an early dinner and sat and watched as a few more canoes straggled in.  It was painful to watch some of them as it was such a struggle to paddle in this wind.  I imagine we too looked painful as we paddled !

We had a pretty good sleep, nothing like getting down and trying to crawl into a tent at our age haha.  Oh and we take air mattresses too.  We need our comfort.  And we sleep pretty good on them I’d say.   We could hear the wind all night, it just didn’t let up.

For those that have not ever done an Interior Canoe trip (or Back Country trip) this is your washroom facility.  And on this particular site, the washroom facility was about a 100-120 metre hike from the site.  We call this the Thunderbox or Big John. 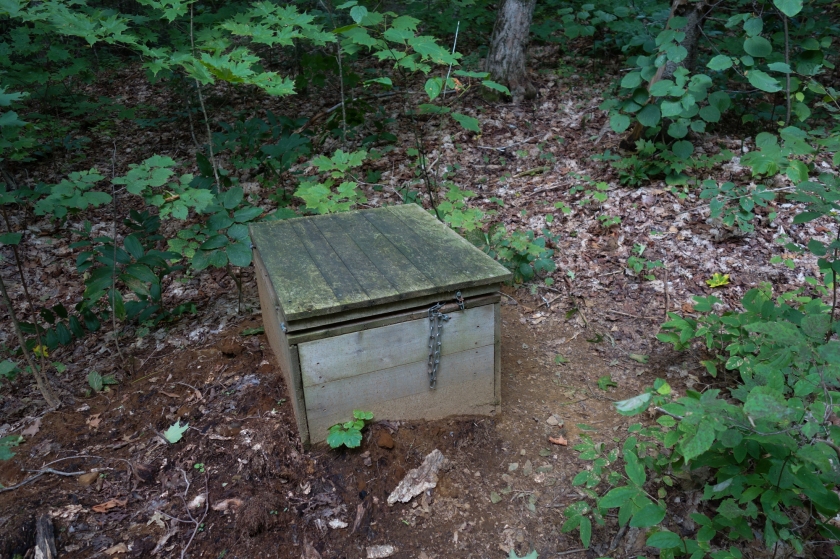 Friday was an okay day, still windy but not as bad as yesterday.  We paddled the perimeter of the Bay and floated around a marsh area where we spotted a heron.  We came across some rapids where we spotted a kingfisher, that’s one elusive little bird.  There was also a family of loons living on the lake,  we usually saw at least five together.

The photo below are some rapids located in the corner of Parkside Bay.  According to the map, the boundary for Algonquin park is just on the other side.  Interesting.

It was a fairly quiet day but we enjoyed it.  We went walking through the woods and gathered some wood from the ground for our campfire so we could cook our Kraft Dinner !

Saturday started out okay, a little rain off and on but not bad.  So after our coffee we decided to go for another paddle.  Big Mistake !  We paddled to the other side of the Bay to check out a couple of empty campsites.  We got out of the canoe, tied it up and just after we entered the campsite to take a look, it started to rain…………….hard.  Very hard.  It did not look like it was going to end anytime soon so we hopped back into the canoe and paddled very fast back to our site.  And Nope, it did not end anytime soon, in fact it rained right through the day, into the night, overnight and into the next morning.

So what do you do when sitting under a tarp in the middle of nowhere?  We played Crazy Eights with the deck of cards we brought that’s what !  But later on it got so windy that there was no way we were staying dry under the tarp so we sat in the tent for quite a while.

Sunday was an okay day, lots of wind, dark clouds and looked like it was going to rain any minute.

Monday we were supposed to leave and head over to Big Porcupine Lake for a couple of more nights.  We had our coffee and packed up and headed out.  Just as we left the Bay to enter into Ragged Lake proper, it started to rain, and honestly it was a torrential downpour.  I was soaked through in about 3 seconds flat.  But we kept paddling !  After a few minutes it stopped and we debated on what to do, go on to Big Porcupine or go home.  We passed some people on a campsite and got talking to them about the weather.  They said the weather forecast was rain, rain and more rain until Thursday.  Well that helped make our decision.  We kept paddling and stopped at the turn to go to the Big Porcupine portage and discussed it again but it started to spit rain and so we said Nope think we’ll head home. 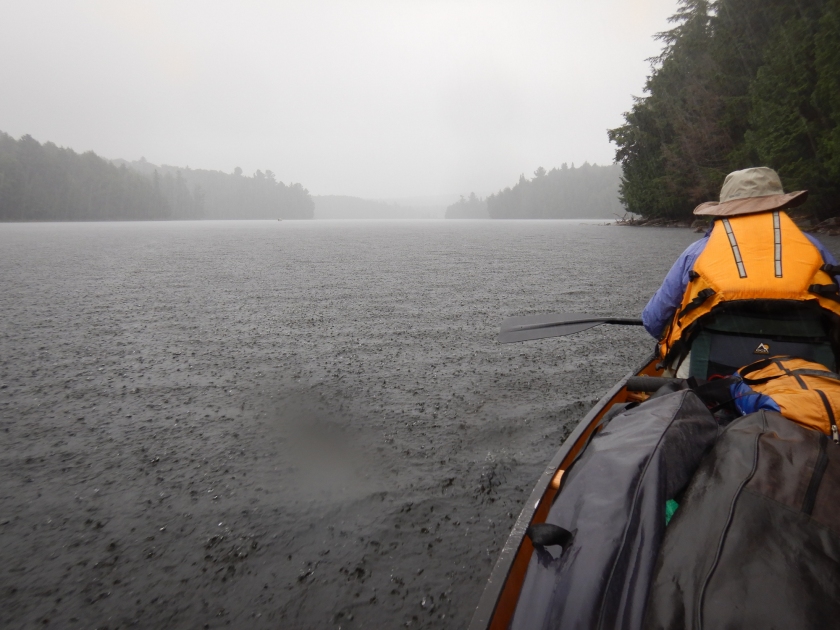 We reached the portage and it was pretty slippery going on the trail.  But it didn’t take us long and there were other people leaving and a few people coming in.

We headed out on Smoke Lake and the water was surprisingly calm.  It took us about 1 hour and 10 minutes to get back across.  The last 20 minutes or so the winds picked up and there were baby whitecaps starting up.  As we were unloading our canoe, it started to rain again.  We loaded up and headed across the highway to Canoe Lake where the showers were located.

After having a shower and checking out the store and watching some paddlers head out, we decided to head home.

So as far as wildlife, we did not see too much on this trip.  Some loons, a heron, seagull, kingfisher, chipmunks and squirrels.   However, after we had our shower at the washrooms at Canoe Lake we headed down Highway 60 and just at Kilometre 16 a black bear was standing on the side of the road.  We slowed down and he stopped and looked at us and took off.   We did about 37 kilometres on this trip, not as much as we would have liked but with the weather we just didn’t paddle as much or as often.

It rained more on the way home, off and on.  We arrived home Monday night and of course on Tuesday it rained and there was a severe thunderstorm watch for Canoe Lake/Ragged Lake area that night.
It was disappointing to end our trip early but I believe it was the right decision and there is always another time and another lake !

One thought on “Algonquin Back Country Canoe Trip – August – Summer 2018”