We didn’t get to our hotel until about 3 a.m. Wednesday morning but we were up and on our bus by 9.  First we had a delicious breakfast buffet at our hotel which was the Leela Ambience Convention Centre.  It was very marbley, I know you are thinking, that’s not a word…… well it is now.  Lots of marble and the hotel seemed very dark to me, I did not get a warm, friendly feeling.  There was a locked gate the bus had to drive through and then we had to put our bags through a detector stationed right at the front entrance prior to entering the hotel.

It was about 27 Celsius but the SMOG.  Holy Wow.  The smell in the hotel was pretty bad and you could hardly see anything outside.  I guess Delhi is pretty bad for smog all the time.  Plus it’s the Dewali Festival so they are putting off a ton of fireworks which does nothing to help keep the air clear and clean.  Although I think the glory days of clear skies have come and gone in Delhi.

I did nothing to this photo (below), this is the SMOG from our hotel room. 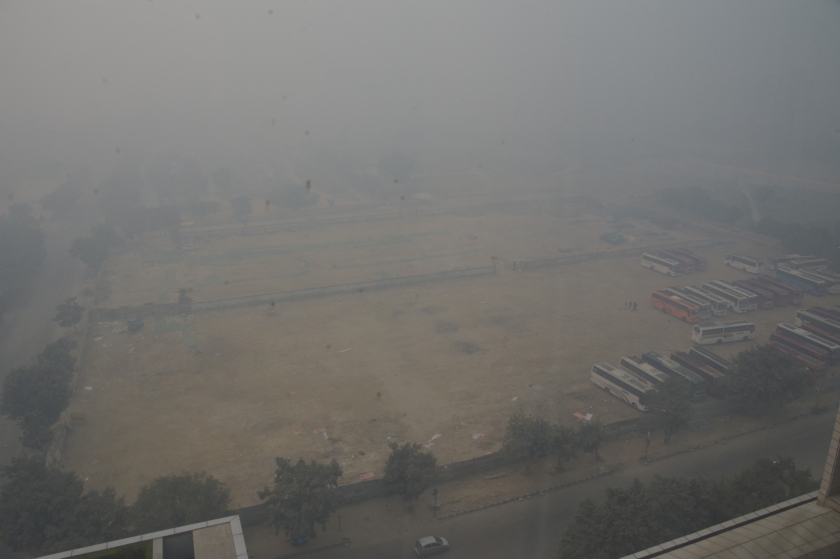 We first headed to the Jama Masjid (Great Mosque).  This mosque is the largest in India; the courtyard can hold 25,000 people.  Construction began in 1644.   There are three gates and four towers and 2-40 metre high minarets of which Clint and Rob climbed to the top of one of them.   There was no cost to enter but if you wanted to take photos you had to pay.  Clint took his camera and I didn’t take mine so we only had to pay for one camera.  Shoes had to be left at the front entrance and women had to borrow robes to wear over their clothes.  If men were in shorts, they had to borrow wraps that looked like skirts wrapped around their waist.

As previously mentioned, Clint and Rob climbed up the stairs to walk the perimeter of the mosque.  Quite the views from up there as you can see from these photos that Clint took. 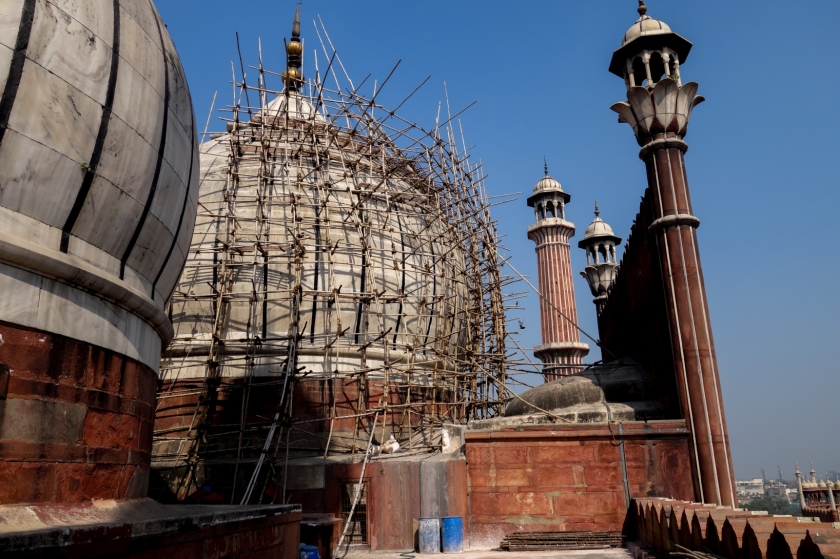 When we left the mosque, Amit hired rickshaws for us all and they took us to the Spice Market

The guy at the Spice Market was terrific, he gave us the scoop on all the different spices and how to use them and what they were made of etc.  Very informative.  I think everyone bought some spices, I know we did.  The rickshaw ride was something else.  I had my elbow setting on the outside rail of the vehicle and that was a big no-no.  You had to keep your hands, arms, feet as much inside the vehicle as possible.  I can’t believe how close we came to vehicles, cows, other rickshaws, you name it.  I have never seen a busier place.  The traffic was crazy busy.  But we had fun and it was a unique experience for us.  Our first day, Welcome to India lol 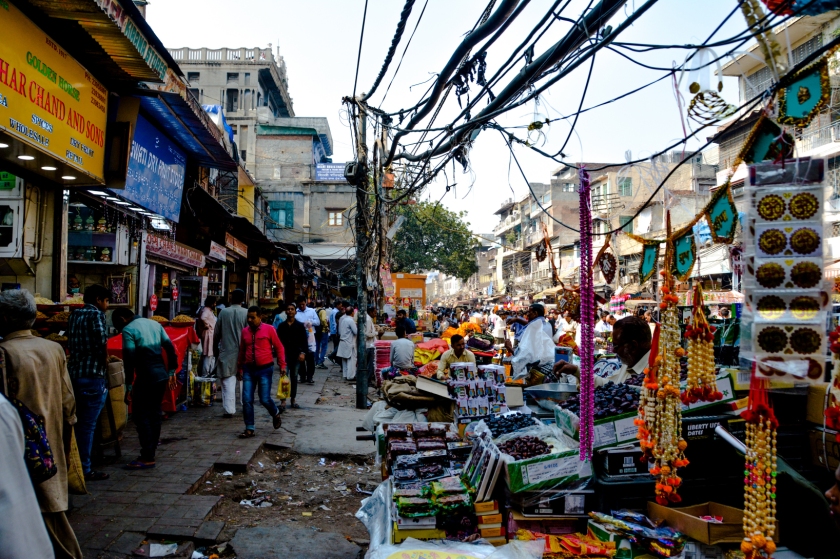 Street that the spice market was on

Below is a photo of the Red Fort which we saw when we got off our rickshaws.  It’s located in the centre of Delhi.

Next stop was  Bangla Sahab, a Sikh Temple.  Again we had to leave our shoes at the door and walk through small pools of water built into the cement to wash our feet prior to entering.  Beautiful spot.  The women had to cover their heads and were given a headscarf to wear if you didn’t have your own.  I took my own scarf with me every day just in case I needed it. 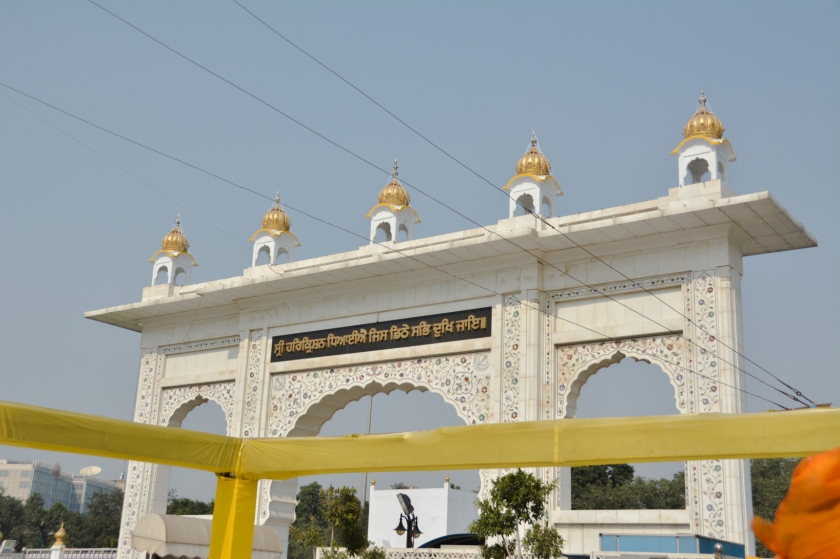 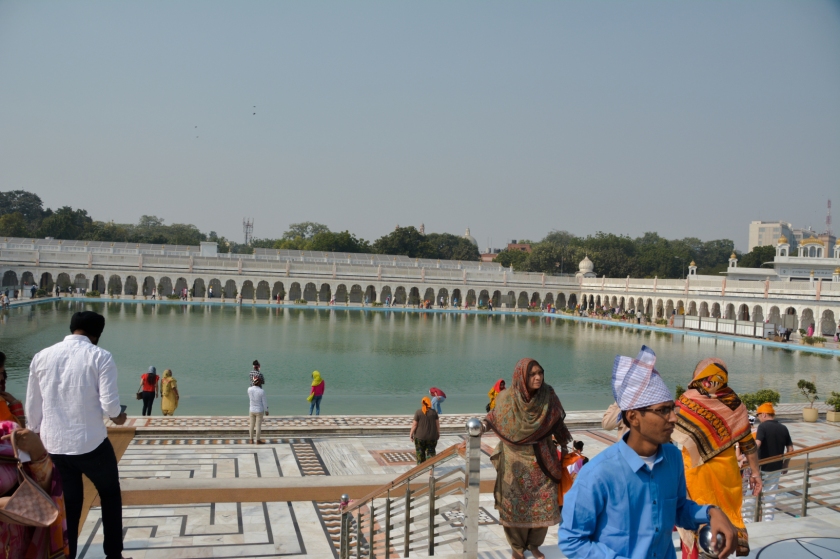 We went to the kitchens and courtyard where they feed approximately 25,000 people a day.  I guess like a soup kitchen.  It is all volunteers that work here, peeling onions and veg, doing dishes, serving food, making chapitis etc.  Quite wonderful when you think about it.  The meal is free, however we did not eat there. But we did walk through the kitchen and watched them prepare the food and some of those in our group participated in rolling the dough for the chapitis.

Next we did some driving around Delhi, we drove past the Presidential Palace, twice, and also the India Gate.   So many people; I was reading that the city itself has a population of 257,803; but when you look at the much larger metro area, the population exceeds 26 million.  Unbelievable.  The traffic is crazy busy.  Well actually it’s crazy busy everywhere we went, not just Delhi.   And the horns !!   The whole trip was nothing but horn blowing.  It was amazing, people would use their vehicle horns to warn people they were passing, or telling them to get out of their way,  or just for the hell of it I guess.

We went for lunch at the Luteyen Restaurant………….I think that’s the name…………that’s what I wrote down so that’s what I’m going with.  It was an okay lunch.  I do not think I took any photos here.

Some more views of Delhi, as seen from our bus, on our drive to the Qutb Minar. 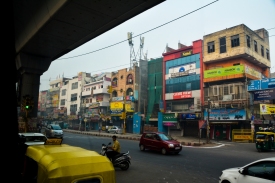 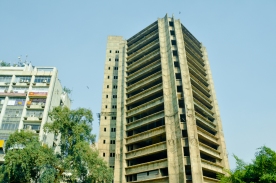 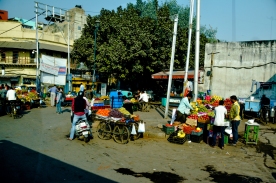 Off to the Qutb Minar UNESCO World Heritage Site . Minarets are a distinctive architectural structure similiar to a tower and usually found near mosques and this one is the tallest in the world.  This was a very cool place and this is the world’s tallest brick minaret.   It is a 72.5 metre (239.5 feet) tapering tower of 5 storeys with a base diameter of 14.3 metres (47 feet), reducing to 2.7 metres (9 feet) at the top.

On the inside, there is a spiral staircase of  379 steps; you can’t climb them anymore.  Because……..I read somewhere that in 1981, 45 people were killed in a stampede after an electrical failure.  The staircase was in darkness and people panicked, so public access has since been denied.

Amit made us wait in one spot until he explained the entire history of the place before he let us loose.  Any one who knows me knows I wanted to take off with my camera and get photos.  But as Amit said, stop clicky clicky and listen to me….. lol.  He told us all about the history and said the tower is made of red sandstone; construction was started around 1202 by the first Muslim Sultan of Delhi and apparently it’s free-standing and made all of bricks.

Just phenomenal what they accomplished hundreds of years ago.   For more information:  More Info 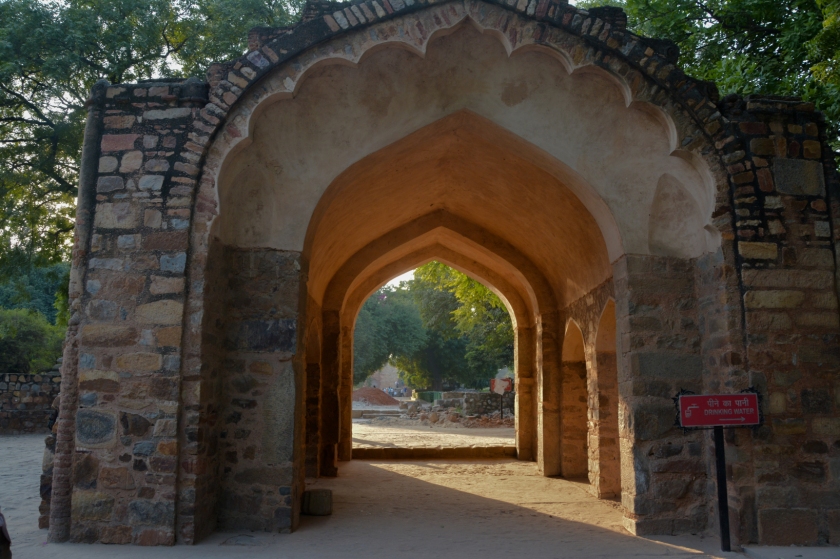 Well that was a busy day and we headed back to our hotel about 6.  Pretty sure we just went up to our room and read for a while and then hit the hay.  We were pretty tired.