Friday 31 May  –  sunny beautiful day and 26 Celsius. We left D.C. in the morning and on the way to Fredericksburg, we stopped at the Marine Museum near Quantico. Free admission, free parking and what a place.  Fantastic layout and displays. We really enjoyed it. The building is an unusual design on the outside, and the inside.  This is probably one of the best museums I have been to.

“Perhaps the most important artifacts in the care of the National Museum of the Marine Corps are the pair of original American flags raised by the Marines on Mount Suribachi on 23 February 1945. The attack transport Missoula donated the smaller flag, raised by the Schrier Patrol on the summit.  Landing Ship Tank (LST) 779, then unloading at Green Beach, donated the larger flag, raised later in the day and portrayed in the famed Joe Rosenthal’s photograph. Frayed by strong winds, the second flag flew from Suribachi for the balance of the battle for Iwo Jima.”

We toured all of the downstairs area and then went upstairs and they had a display on war dogs. They were wooden statues of dogs with photos and stories, just terrific.

Just down the hallway from that display was Tuns Tavern, which is an important place to the Marine Corps.  Let me tell you why………..  Legend has it that the Marine Corps was founded in 1775 at the original Tun Tavern in Philadelphia. This Tun Tavern is the style of a colonial era tavern, and features a large painting depicting famous Marines from the founding of the Corps to the present day.

So into Tun’s Tavern we went and sat at the bar.  We had beer from a brewery called Six Bears and a Goat Brewery.   Clint had lemon chicken soup and we shared a spinach and artichoke dip.  Really good food. We got talking to the young girl working there and we told her we were on our way to Fredricksburg.  She told us about Bennie’s pizza in Fredericksburg,  actually she raved about it.  After we were done at the Marine Museum we headed off. As we were leaving the Museum, one of the staff spoke to us and asked where we were from. We said we were from Canada and he said I need to show you something. We thought it was something to do with Canada but no it wasn’t.  It was a George coin.  To this day, for the life of me, I can’t remember the story behind this coin.  And yes I googled it and still couldn’t figure it out.

I spotted this sign on the side of a building on the drive to Fredricksburg.  I just thought it was super cute.

We made it to the Aquia Pines campground, site A42.  It was really hilly and we were up high on a drive-through site. There were lots of trees and up top looks like a provincial Park, that’s not looked after. It was only 50 bucks a night so we set up and as it was late we just hung around and played backgammon and talked to a man walking his two dogs. This is an odd place, don’t ask me why, just is.   They say they offer free Wi-Fi but I’m calling them on that, I got one hour free today and I didn’t get any the next day.  The Campgrounds we have stayed at this trip are notorious for that; offering free WiFi but there isn’t.  If you go to this Park’s website and read their Rules, they are pretty funny.

Saturday, 1 June. –  31 Celsius and sunny but not as hot as Washington, DC. We got to Fredericksburg, Virginia about 930 in the morning. We didn’t know it but they were having a big car show downtown, all old cars on display and the whole downtown was roped off.

It was a nice afternoon wandering up and down the streets looking at cars and going into different stores.

We went to the Visitor Center and got trolley tickets for the 1030 tour.  I do love me a good trolley ride.  We had to wait a while so we walked around looking at cars, some very cool autos here today.  At 1030 we did the 90 minute tour. Kathy was our guide and she was very good; friendly and funny. This is a stunning old town and I think she said over 300 buildings are considered historic.

After the tour, we walked up and down the downtown core. We went to Benny’s Pizza which is a small place right downtown and packed with people. We got a slice each and they were the biggest slices I’ve ever seen. The whole pizza is probably 2 times bigger than an extra-large pizza that we know of.  I liked it but Clint said there was no flavor. It was five dollars a slice.

Then off we went to Spencer-Devon brewery.  The guy was really friendly and the beer was okay.  It was located in a big open building. Not a lot of ambience though, kind of a big old plain building.  Needs some character.

Then we walked a few blocks up to the Red Dragon Brewery. I thought it was an Asian place but apparently the Red Dragon appears on the National Flag of Wales.  Why didn’t I know that?  Trivia is my thing.    This was a newer building and the young guy and the two girls, who were servers,  were very friendly. Clint loved their stout but they had just run out so he only got a taste. We stayed quite a while and talked to an older couple at the bar.  Really friendly, welcoming brewery.

After that we walked back to town to Ramsey (our truck)  and drove outside of town to the Maltese Brewery. Maltese crosses are the  firefighters cross, which I did not know until today.  I guess I should have?  Apparently Trivia is not my thing………..There were lots of firefighter items displayed and firefighters were there too.  Clint really liked their stout but the rest of their beer was so-so.

We left and went back to town to the National Parks Visitor Center.We watched a movie and looked at all the displays they had.  Then we parked down the road a bit by the Monument to the Angel of Marye’s Heights.  This depicts a young man giving water to the troops during the Civil War.  December 14, 1862.  The story goes – the Confederate Army devastated Union Troops as they were trying to charge the hill at Marye’s Heights.  Night fell and countless soldiers, mostly Union, lay crying for water and help.  A Confederate soldier, Richard Rowland, could not stand to listen to the cries any longer.  His General allowed him to provide water to the men on the battleground.  He took a white flag and water and was able to help the dying men.  The Union Forces, seeing this, did not shoot upon Richard.  What a story of courage.

We walked all around the outdoor area reading all the plaques and information.  We also walked through the Confederate cemetery. 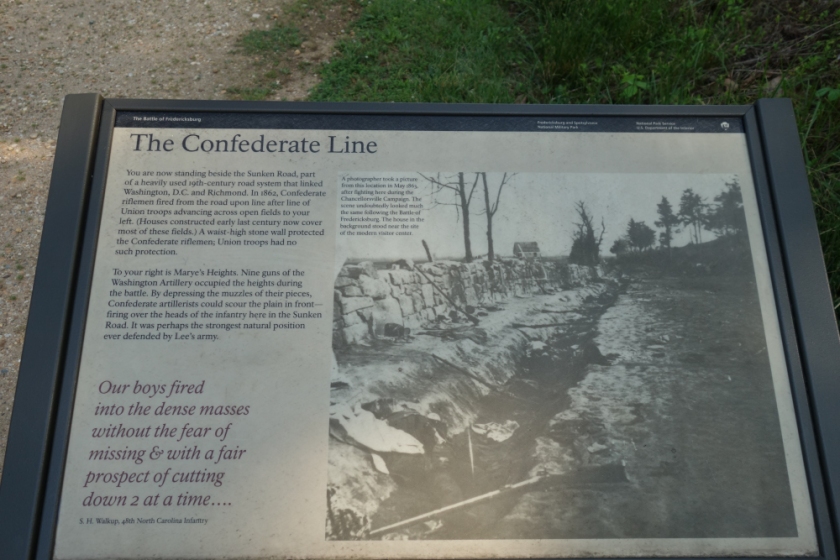 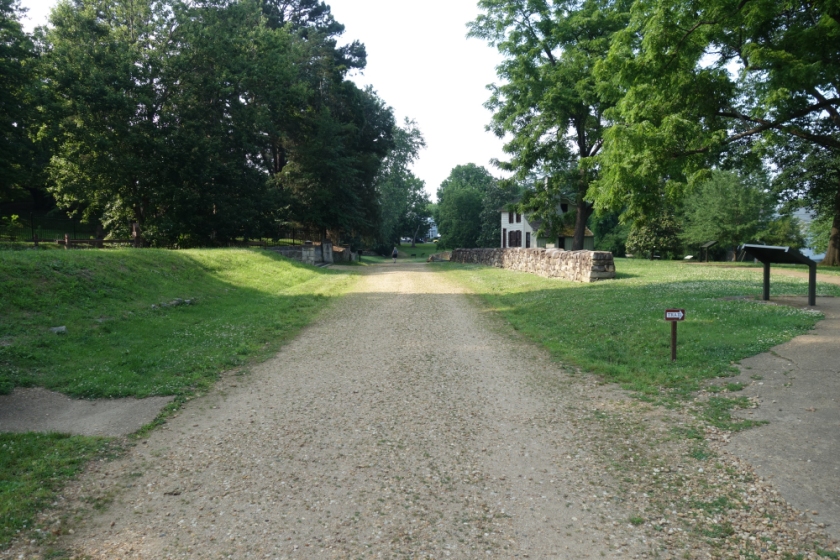 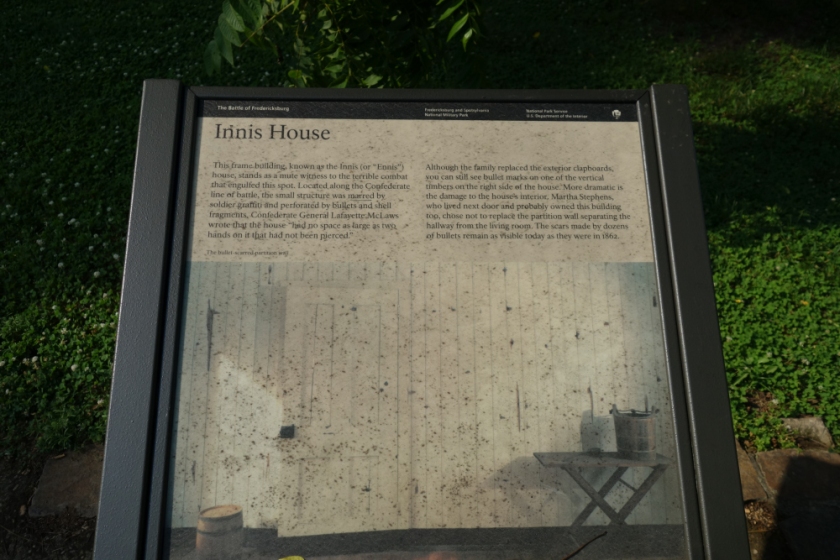 Afterwards we left the town and drove out to  Adventure Brewing company and their beer was good.  I liked the IPAs.  Anna and the young guy who were working were really nice.   She is a real sweetheart.  Clint and Anna’s husband were sitting together at the bar and chatting the whole time.  Really nice couple.

Well our adventures here are at a close, off to Williamsburg, Virginia.