Monday 5 August  –   sunny and 31 Celsius. We packed up and left at 10:30 and headed to Napa Valley and Sonoma.  Lots and lots of traffic, I thought San Francisco was bad; actually ALL of California is bad for traffic and people.  I mean let’s fact it, there are 39 million people in California and only 36 million in Canada, so you can imagine the amount of cars and people in this state.   Also, Canada is approximately 25 times the size of California.  Canada is approximately  9,984,670 sq km and California is s approximately 403,882 sq km.   So that’s a lot of people crammed into this State.

We set up in Vineyard RV Park in Vacaville. It was $65 a night and we stayed three nights. It was a really nice pull through site and a nice campground.  We sat outside and ate our lunch and then we decided to drive downtown Napa to the Visitor Center. We got some information and coupons and off we went.

A random shot of a tractor in a field.  I like old things, buildings, vehicles,whatever. 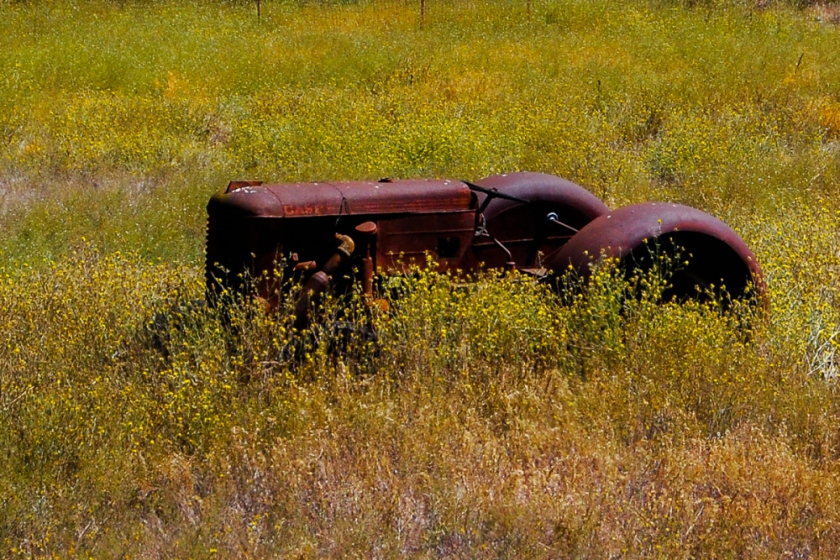 We started at Andretti winery and it was $25 each for tastings.  That seemed like a lot to us.  We are used to the Niagara Region in Ontario and you may pay, at the most, $10 for a tasting.  Well to clarify, sometimes they will ask a lot more for their “vintage” wine tastings but for a basic tasting of their wines it is a lot cheaper.  Clint really liked the Reds but I didn’t like any of the whites.  While we were there one of the servers heard we were from Canada so he sang “Oh Canada” for us.  He knew all the words.  We ended up singing along with him.  Fun place! 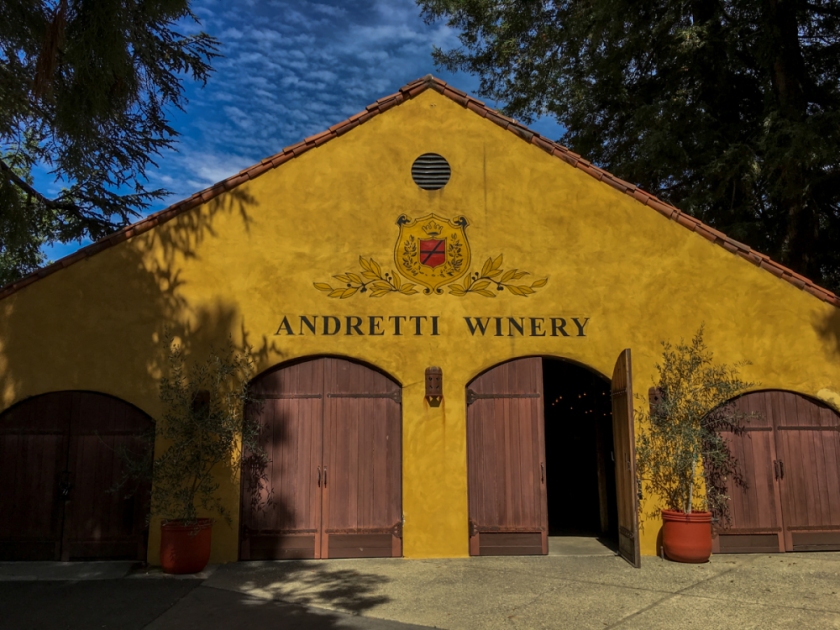 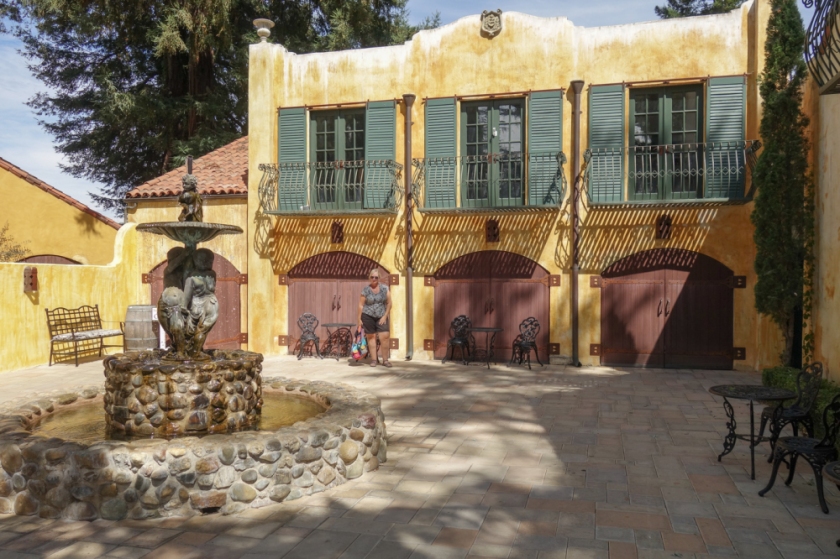 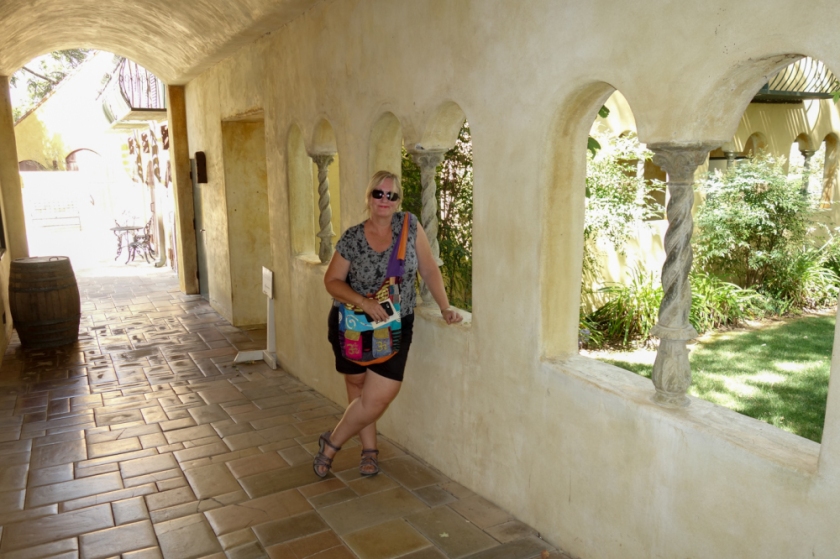 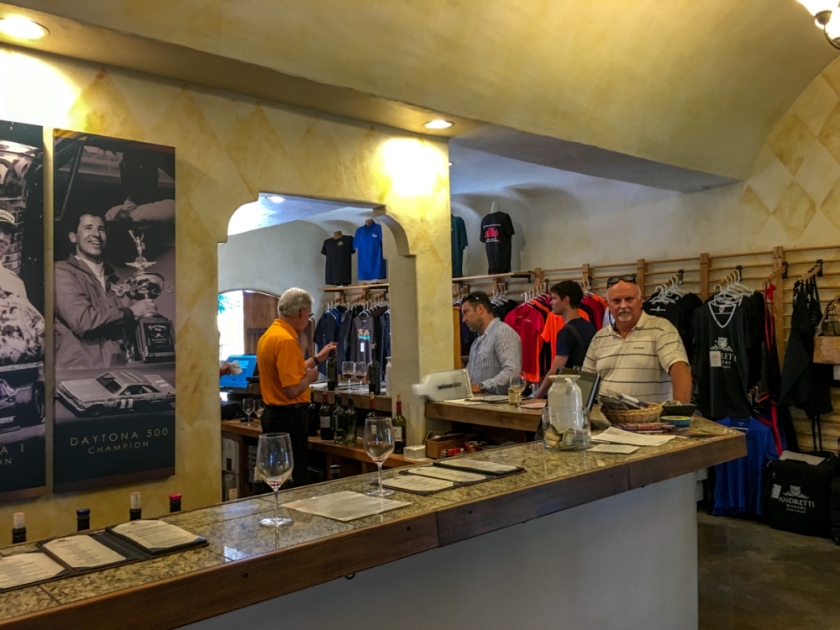 Then we went back to Napa and went downtown to a bar called Downtown Joe’s and had a beer. I had a cream ale and spinach dip and Clint had a porter and soup.  Great place, small and welcoming and the food and beer were good too.

Then we walked up the street and across the bridge to the Stone Brewery.  It’s a beautiful old building on the corner, by the bridge, but they have no parking there at all. We parked across and down the street and walked back. This place is really, really nice, and huge. We sat at the bar and I had a glass of IPA which is really good and we split a grilled cheese sandwich and then headed home. 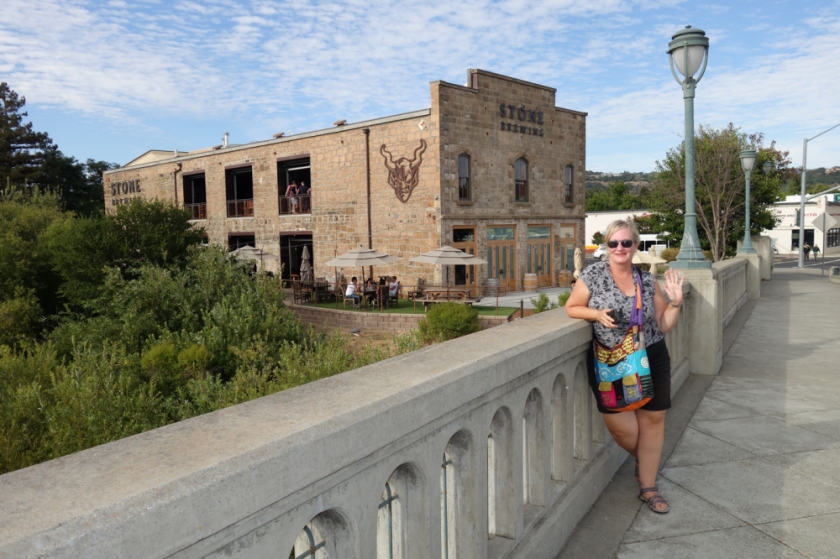 Tuesday 6 August – Happy birthday Clint !  We headed back to Napa and did the Silverado Trail Drive.  It was an okay drive, nothing too exciting but we did stop at a lake and got photos of a heron and an Osprey. 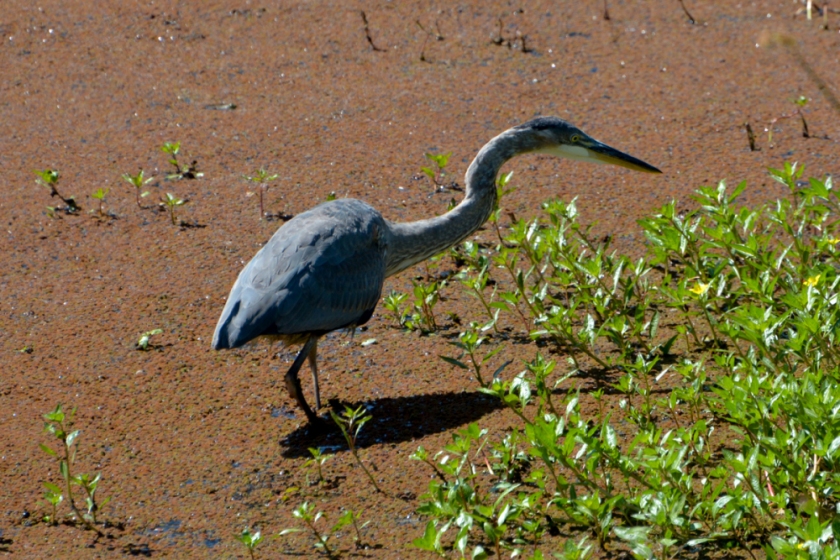 Onto the Castello di Amorosa Winery which is a huge big castle, set up on a little hill.  We had to pay $30 each for a tasting and to get into the castle. You couldn’t even get in to look around without paying. It was good wine but really expensive. They do have to pay for the castle and accompanying bills. 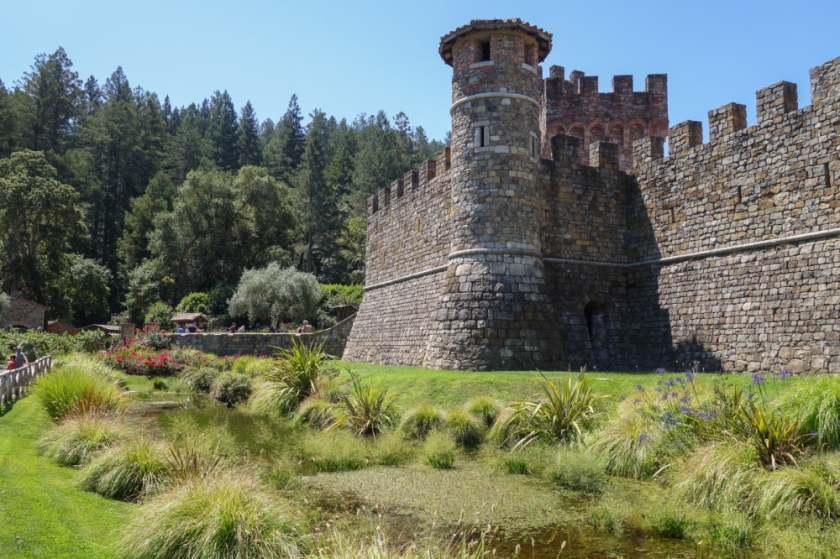 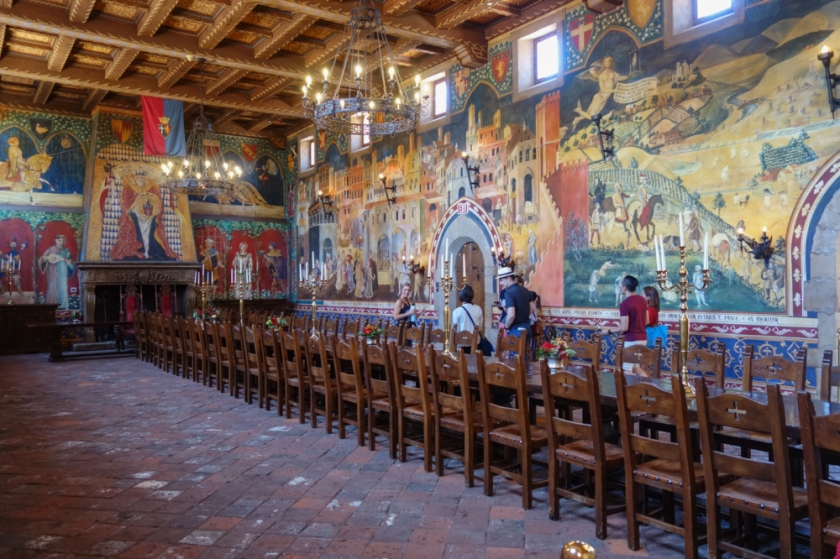 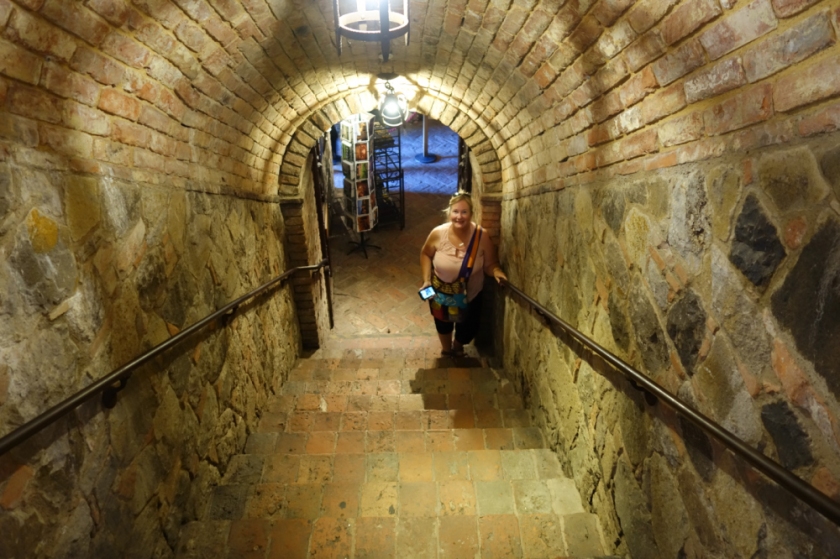 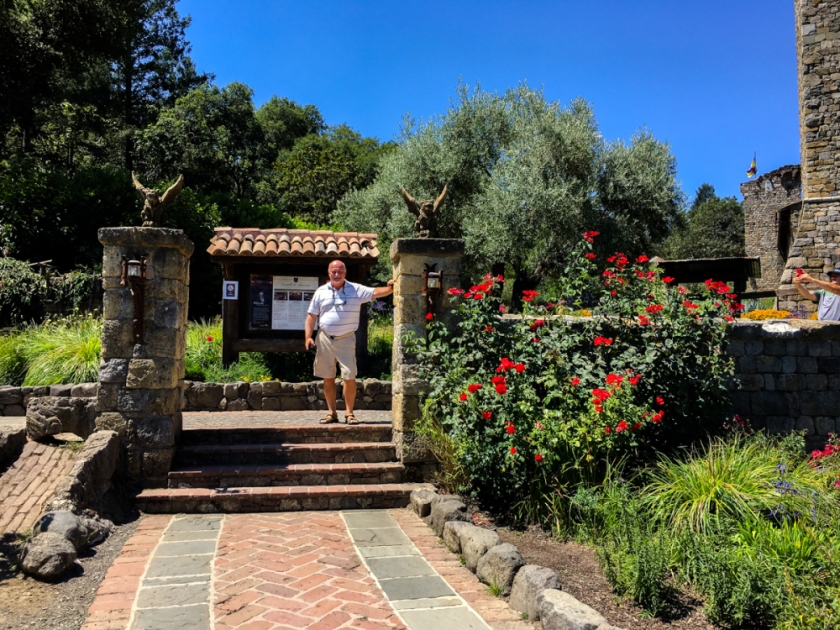 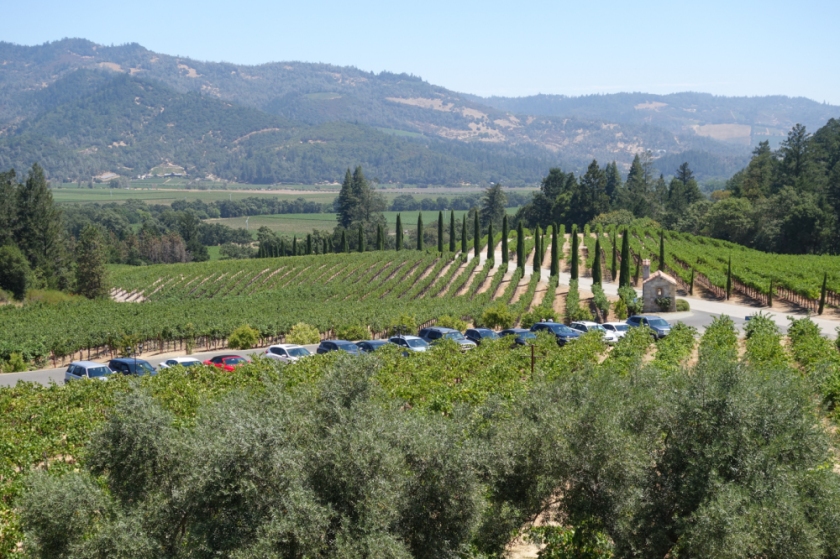 Then off to the Calistoga Inn and Brewery to try some beer.   We did talk to two couples who were at the bar also for a long time. One of the men had his birthday the same day as Clint’s.  When the server heard it was Clint’s birthday she didn’t charge us for the tasters.  How sweet and thoughtful. 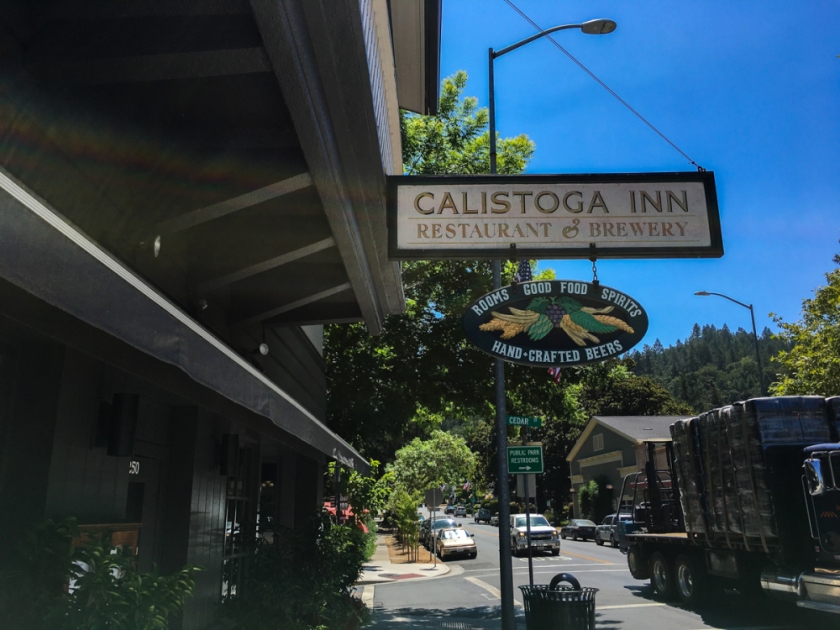 We drove around Calistoga which was a cute little town and then we went west to Sterling Winery.  We didn’t get anything to drink, we just walked around to look at it.  Some wineries are so gorgeous and well done that it is nice just to walk around the grounds and admire the architecture and/or history. 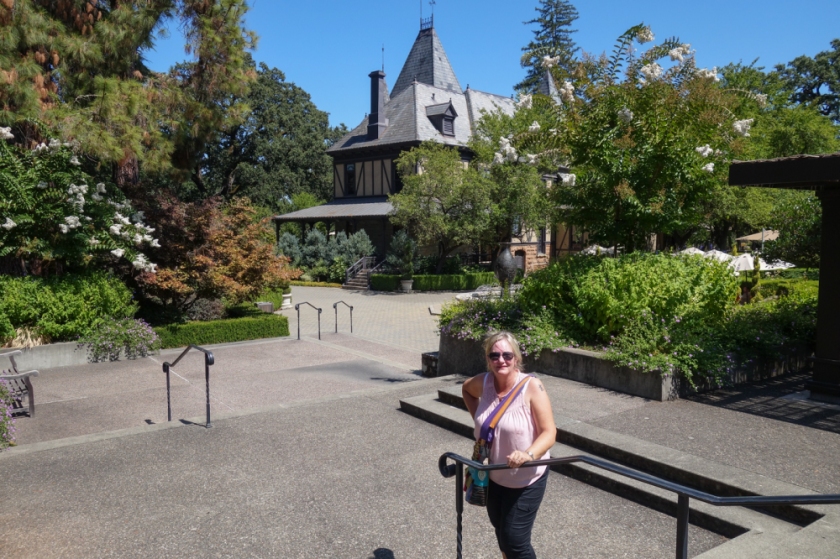 Then on to V. Sattui Winery, I had a 2-for-1 coupon that I was given at the Visitor Center, so we paid $20 for both of us to have a tasting.  It was pretty good wine. 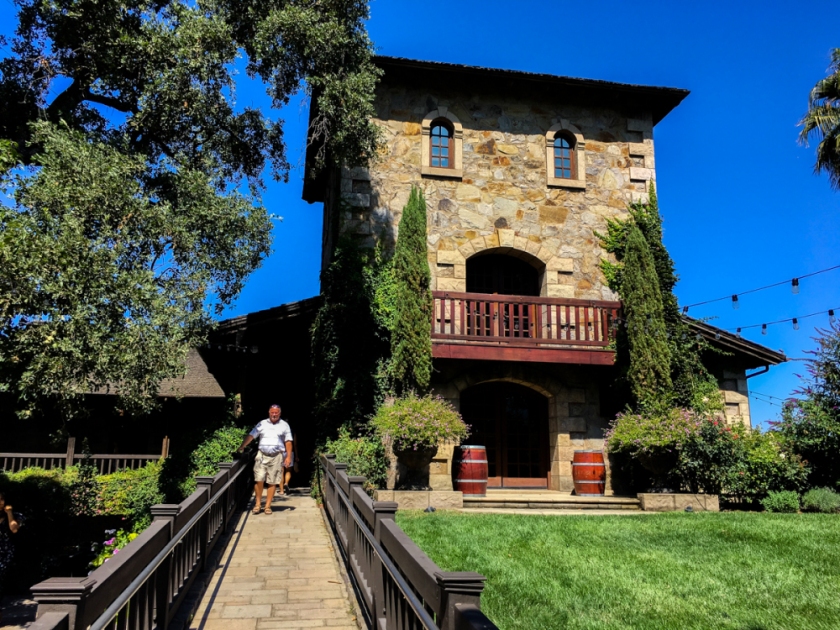 We left and came back to Vacaville and ate at a Vietnamese restaurant, it was very good. 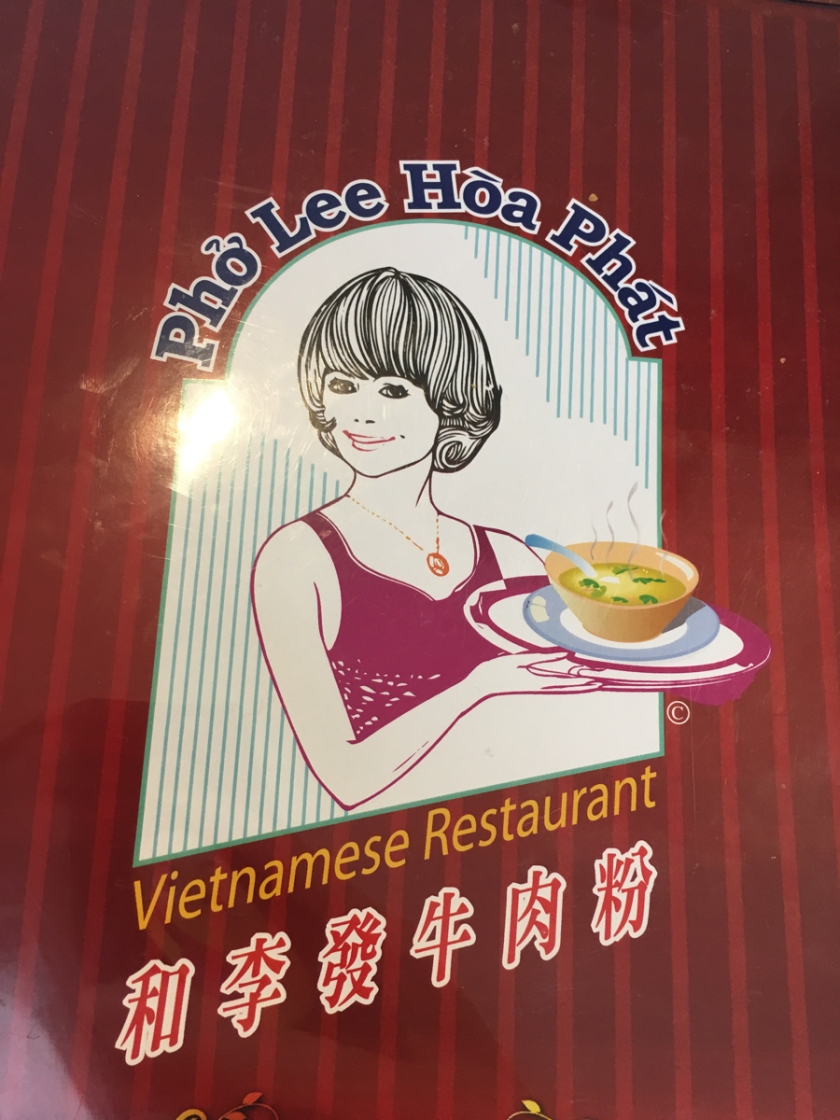 Wednesday 7 August.  –  Well  this will be a good day……….we are off to the Jelly Belly Factory.  It’s free to get in and a very cool place. They give you free samples and the factory would’ve been free for a tour but the lineup was unbelievable. We don’t like lineups. 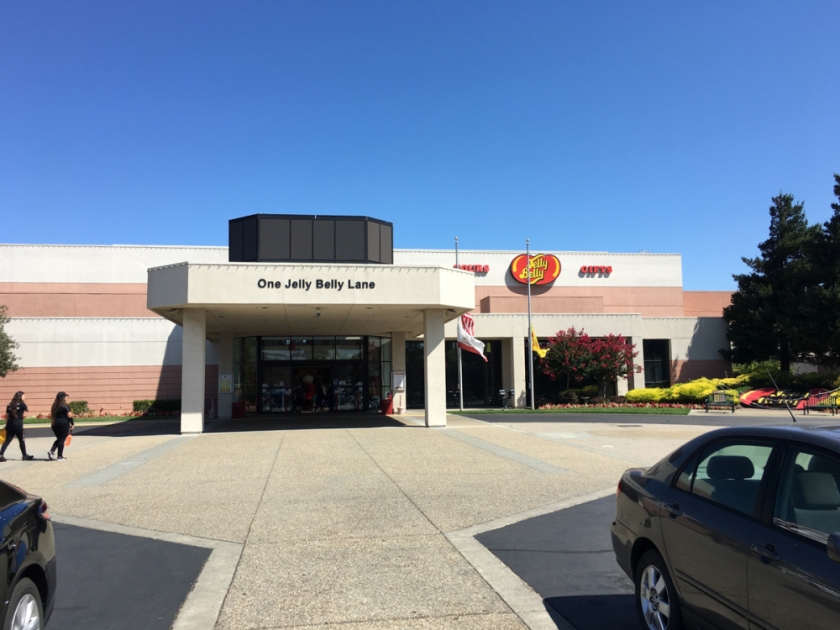 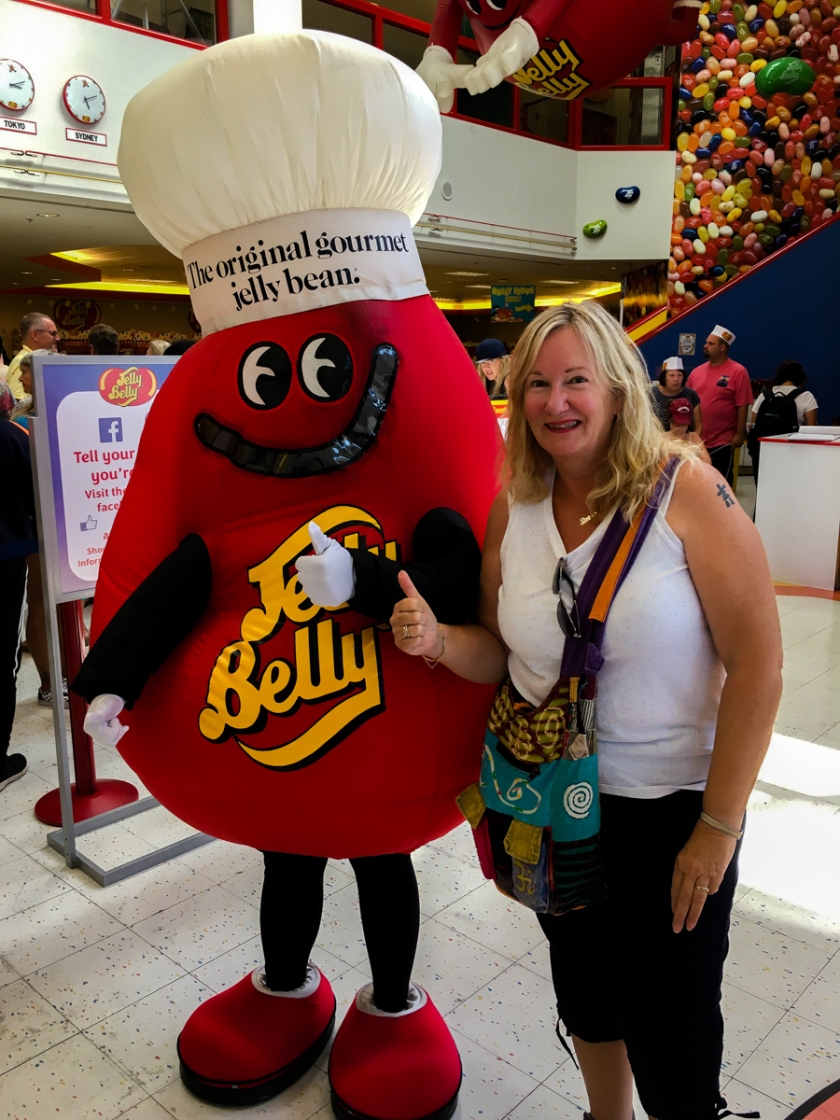 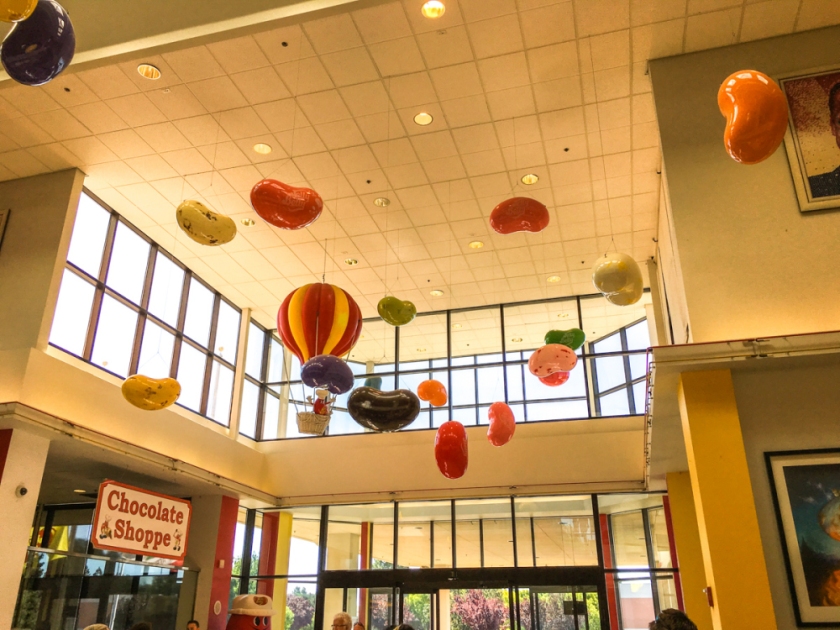 Then we headed over to Santa Rosa to the Charles M Schulz Museum.  I LOVE Snoopy and the Charlie Brown gang, especially when I was a kid. I had all their little paperback books. This is an awesome place and it was $12 each to get in. There is lots to see and they have two floors plus some outside stuff. I really enjoyed it. They had lots of big cartoons up on the walls and a beautiful gift shop. It was quite something to read about how it all got started. 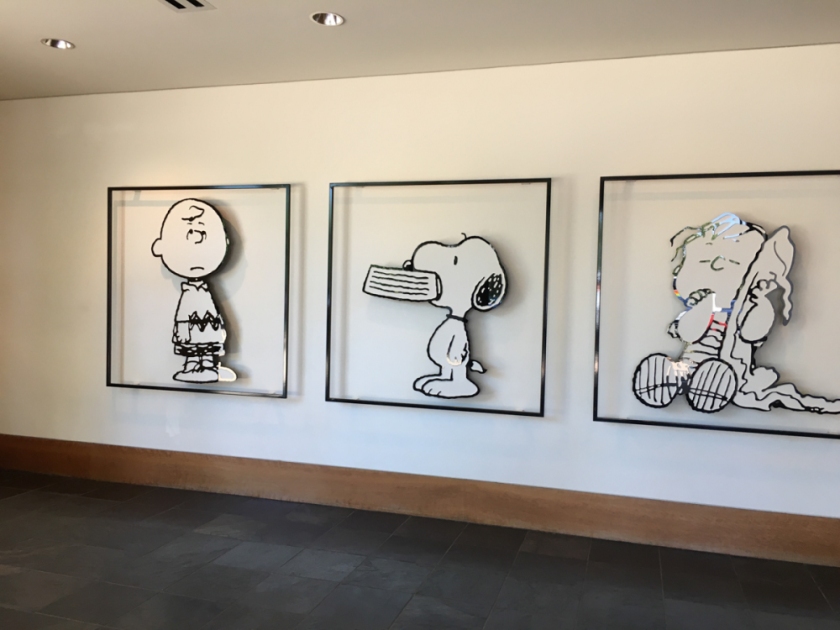 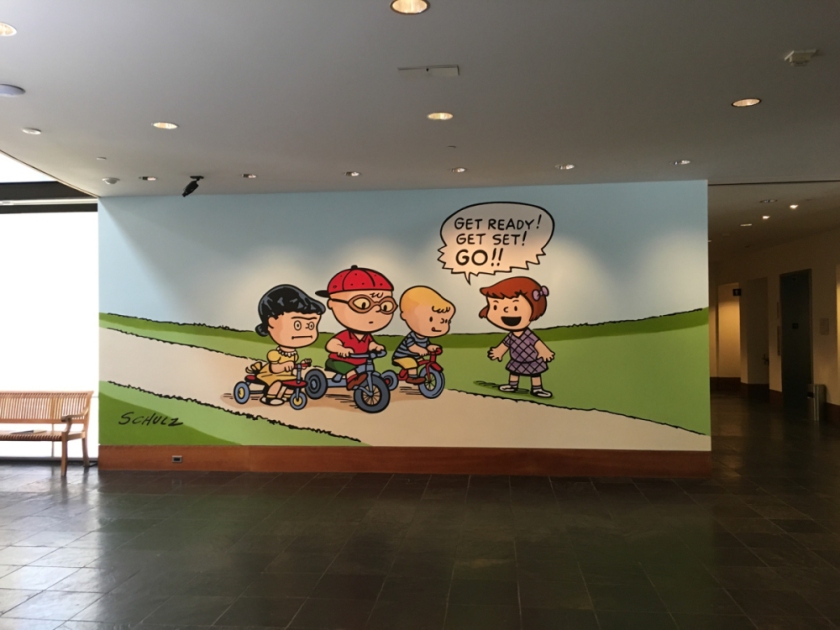 Then we drove to Mission Winery. They have a big statue of St. Francis of Assisi at the front of it. He is my favourite Saint because……….. he is the Patron Saint of all animals.  A really nice lady served us and we bought some cute animal toppers for wine bottles there.  Some as gifts and one for us. 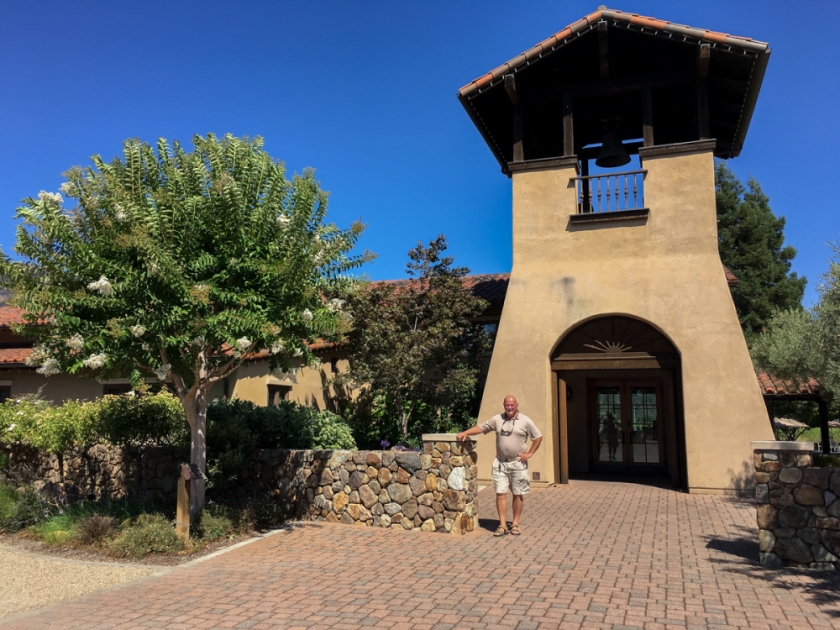 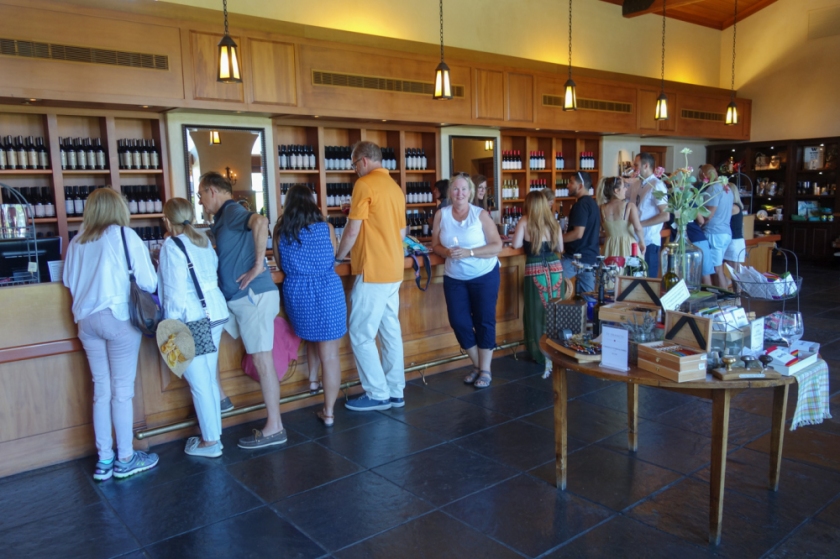 After that we headed to Sonoma Springs Brewery. We played backgammon and had beer.  It’s a small place with seats at the bar and some picnic tables.  The beer was okay and the ambience was pretty good. There were a couple of dogs that kept coming in and out of the open doors.  One little one jumped up on Clint and tried to kiss him and he was so cute. We talked to another couple for a while sitting at our table, he is from Belgium and she is from India. We had a nice chat with her about India.  It was a great afternoon. 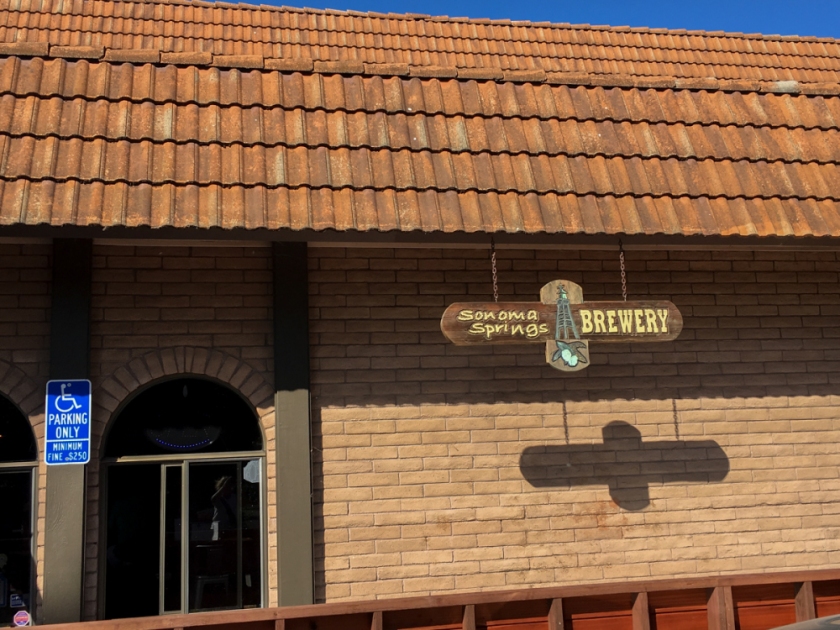 Tomorrow we are off to Redding, California!