Friday 2 August – packed up and left for San Francisco. We got a site at the Fairgrounds in Pleasanton, 45 minute drive from San Francisco. It’s called the Fair Park RV Park and was only $35 a night, we stayed here for three nights. This is a huge place and we stayed in the part they call the South RV Park. Lots of people stay here and a lot of them are full time. We have full hookup and it’s a safe place.

It was very late in the day so we ended up just driving around Pleasanton and stopped at a place for beer. It’s called Main Street Brewery.  The place and the beer were both so-so. This is a really cute town though so we walked around the downtown area and then headed home.

Saturday 3 August – very chilly here it’s only 14 Celsius. What a difference in temperatures. We wanted to get up early so we got up at six and drove to San Francisco. We parked on the street near Pier 27 and it cost us $32 to park. In this area, it costs anywhere from a 1.75 to 4.75 an hour depending on the tine of day. It was $48 and more to park at one of the parking lots. Crazy.  But we did get a spot so it’s all good.  Below is the bridge we took to get to San Francisco, no it’s not the Golden Gate!

We walked down to Pier 39 and spotted a little cafe,  they had some nice pastries and I love scones so we got one and a coffee and sat outside.  It was nice sitting there and people watching so early.  And yes, even that early in the morning, there were a lot of people.

We stopped at the Parks booth to get tickets to Alcatraz Island and they were all sold out until the end of August. The guy told us “go to an independent”  they will have tickets.  Well they did and you would have to pay $150 per ticket vice 40. We opted not to do that. I have been to Alcatraz before (my Dad and I went when I was a teenager) but I was disappointed for Clint.  A lot of history in that old place!

We walked around the area, it was nice, right by the water.

We ended up taking a Big Bus tour around the city, $55 each and the tour was about 2 1/2 hours.  The company was pretty good and I would recommend them. 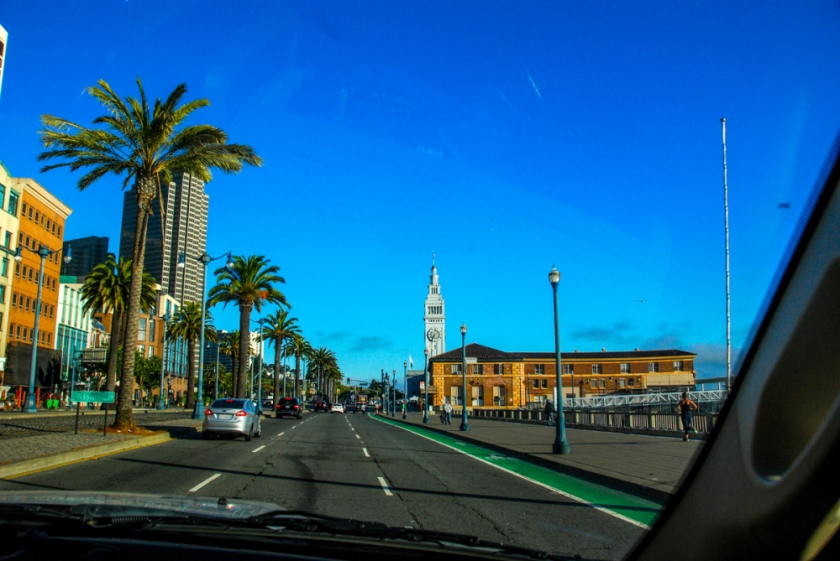 We got off at the third or fourth last stop because we wanted to walk around Chinatown.  This Chinatown is one of the oldest and busiest in the USA. 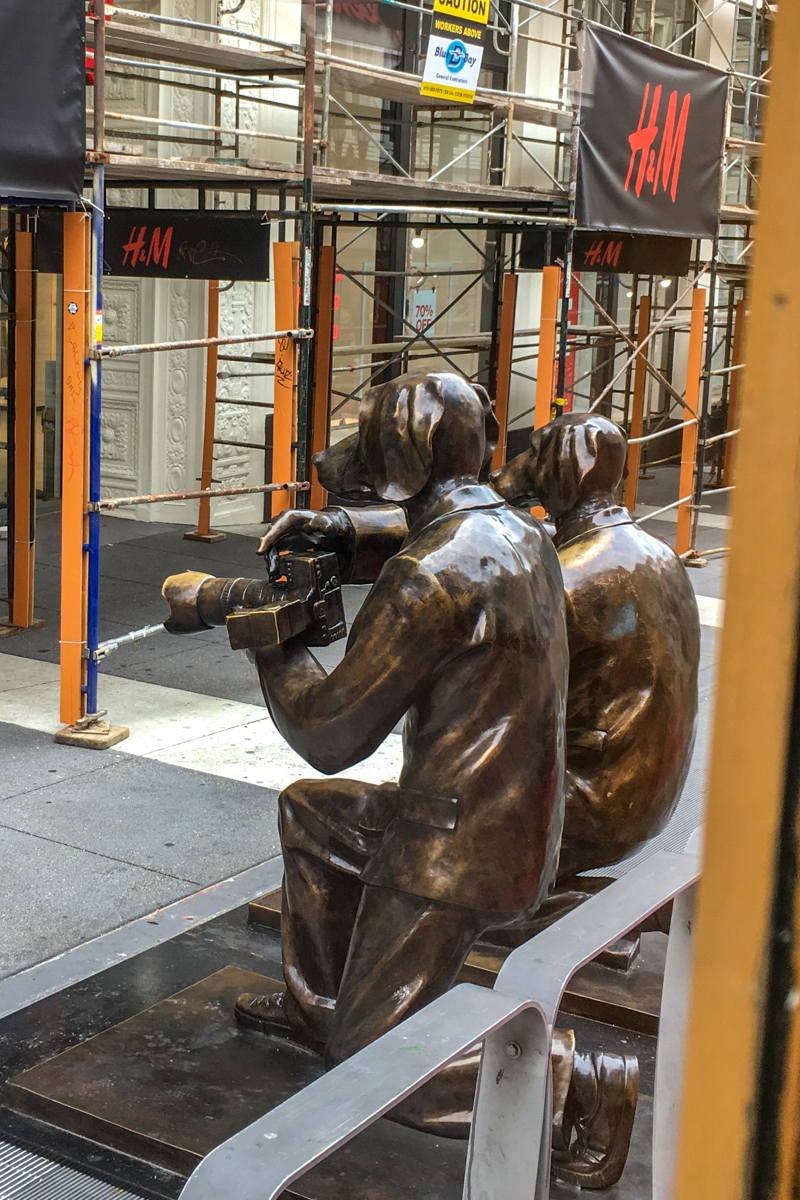 We ate lunch at the Dim Sum Noodle house and the food was pretty good.  Then we just walked up and down all the streets.  So busy and so much to see.  We went into a couple of stores to look around and they had some interesting items.  Chinatown also has some  cool wall murals. 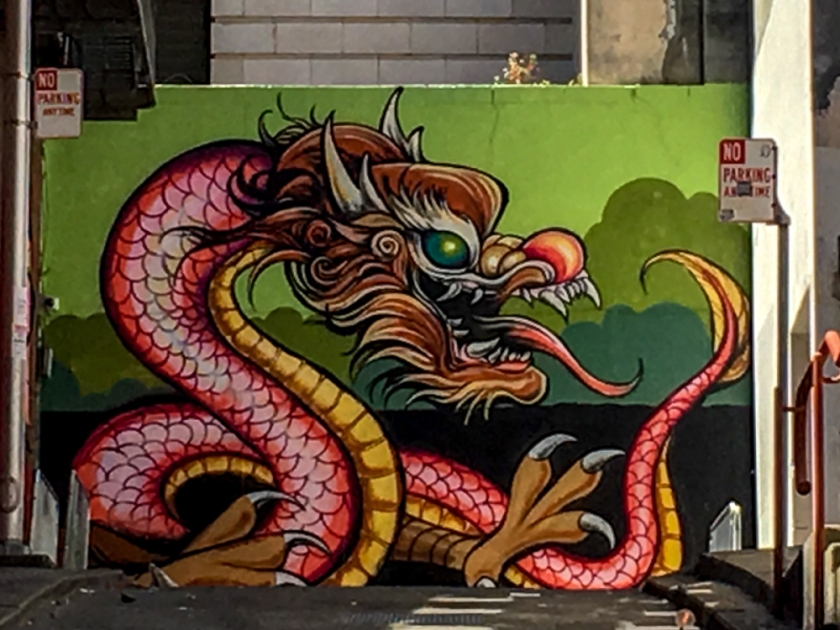 We got back on the bus and went back to the Pier.  On the way back, our bus also took us over  the Golden Gate Bridge and back. It was very cold and windy going over that bridge!  And we were sitting on top of the double decker bus. 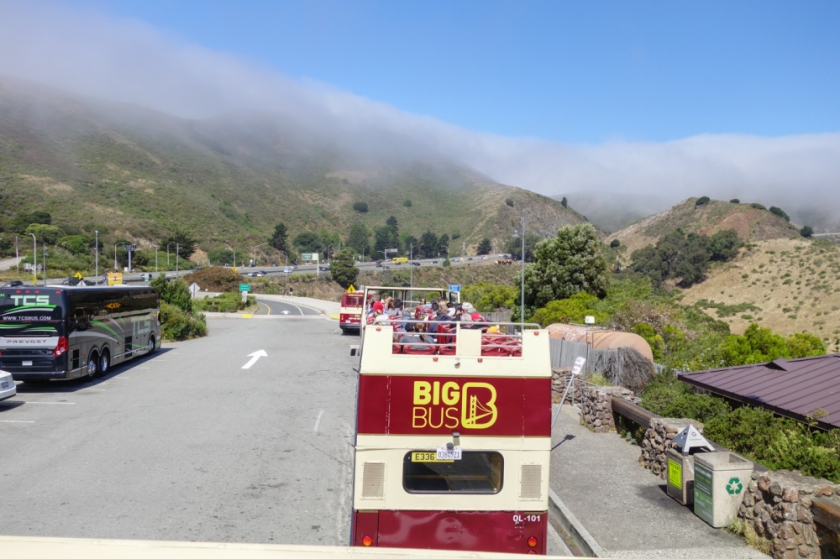 After our bus tour, we walked around down by the water and saw all these sea lions laying on some docks.  They are so funny.   We spent quite a while watching them and their antics. 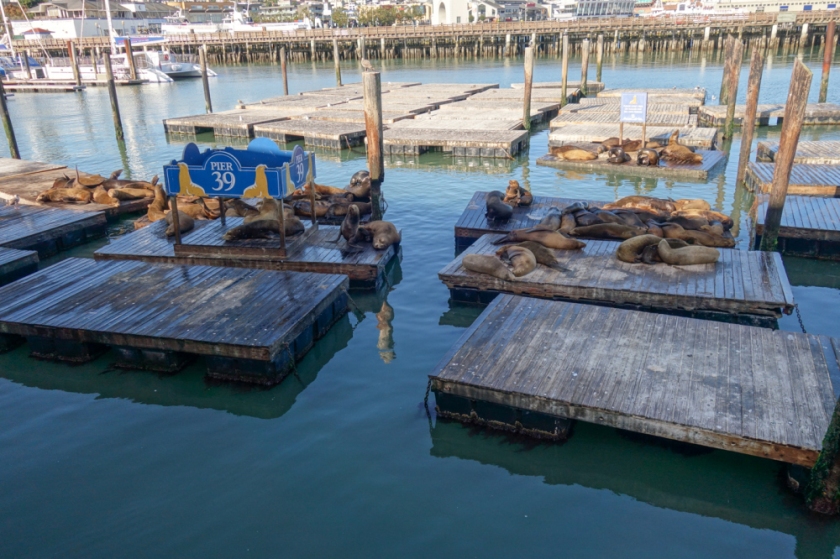 We also walked up to the cable cars, there was a huge lineup and I mean super long. We decided to try it another day.  This is the world’s last manually operated cable car system.  It’s pretty sweet!

We drove back to Pleasanton and had dinner at a very nice Indian restaurant; very, very good food there, nice place.  But I cannot remember the name!

Sunday 4 August  –  12-14 Celsius today. Why?  Why is it so cold?  We got up super early again and left 6:30.   Today we got a good parking spot close to the cable cars.  We got our cable car tickets and got in line. It pays to get up super early. We skipped the first car because we wanted to get a seat on the outside of the car. We didn’t wait long and we were first to get on the 2nd car.   We got the seats we wanted on the left side, so excited.  It was $7 each to go to the end of the line and $7 each to come back down.  You can also get a daily pass.   When you got to the end of the line, you had to get off and get back in a lineup.  Pretty reasonable rates for this historic tour.   I must mention, you can can get and on anywhere you like, when they stop, and they make several stops.

When we got to the end, we had to wait 45 minutes in a lineup to get back on and it was so cold standing in line.

The cable car was packed coming back down and it kept stopping to pick up more people along the way.  The roads were so steep going down, kind of scary to be honest. 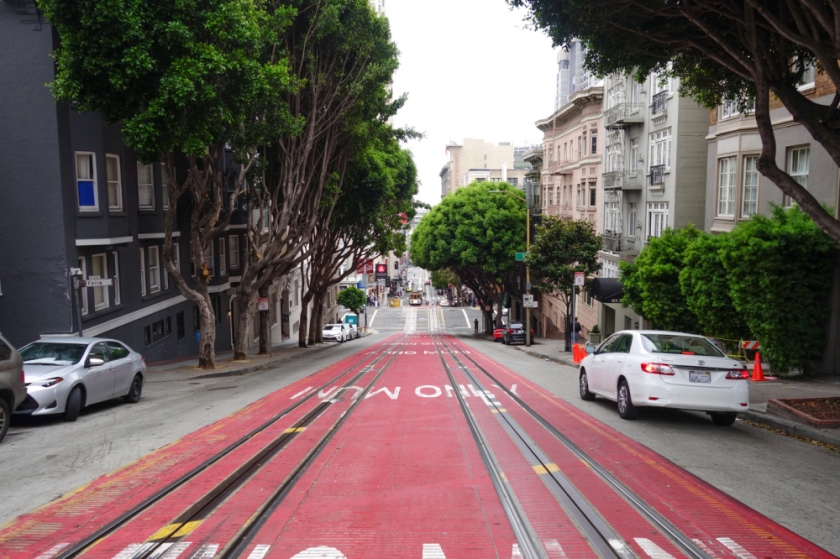 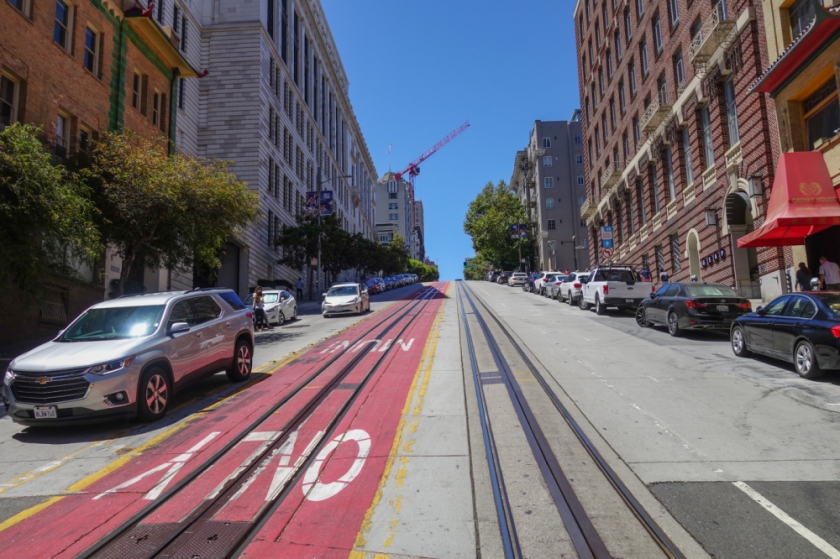 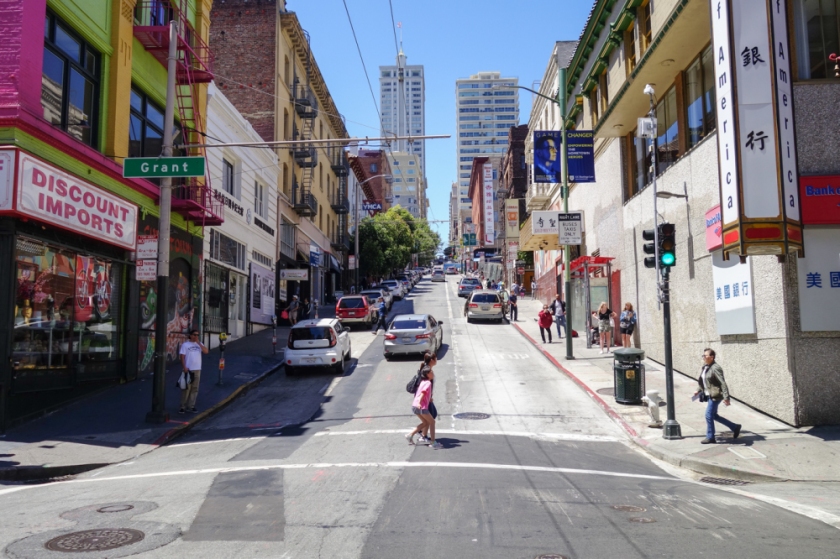 This is the entrance to Lombard Street with 8 hairpin turns!  They call it the Crookedest Street in the World.

Finally back to the bottom !    We got off and walked back down around the wharf. There was an old building called the  Mechanical Museum filled with old games and I mean old, not Nintendo’s from the eighties, OLD. This place was awesome, set in a big building down by the water.  Such an interesting and unique place. We played a few of the games and some of them were super fun and cute. 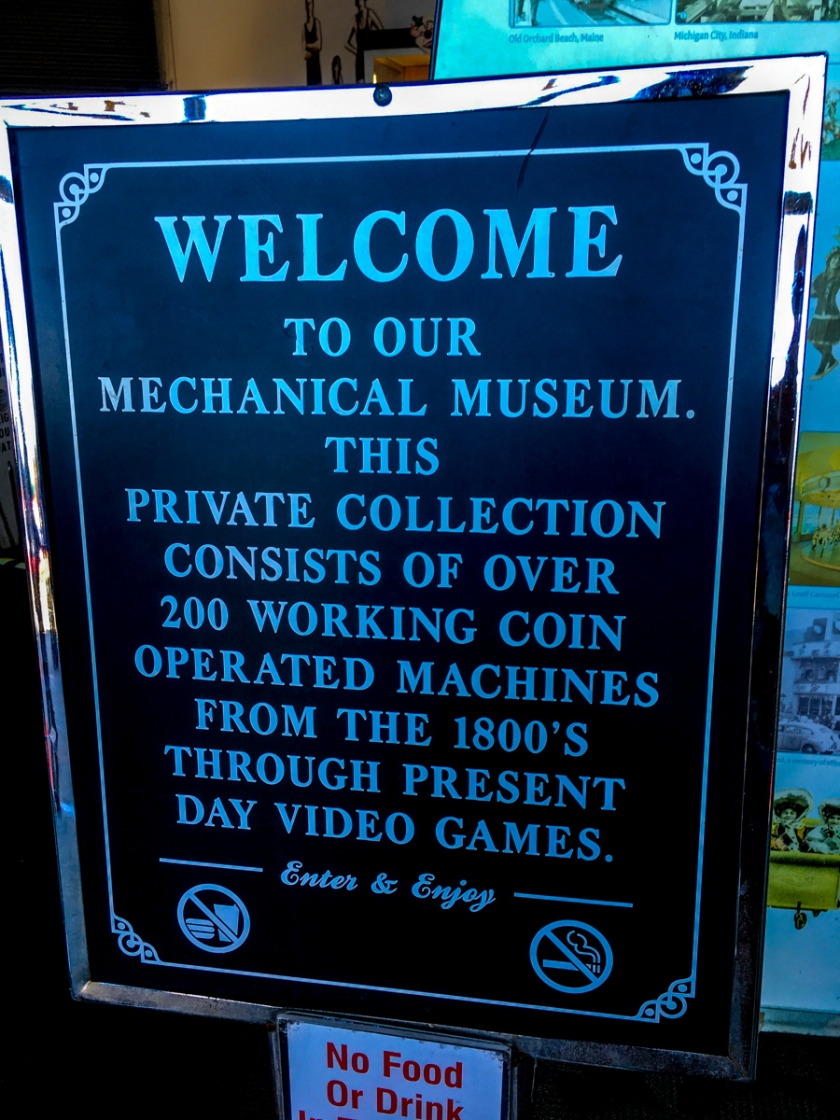 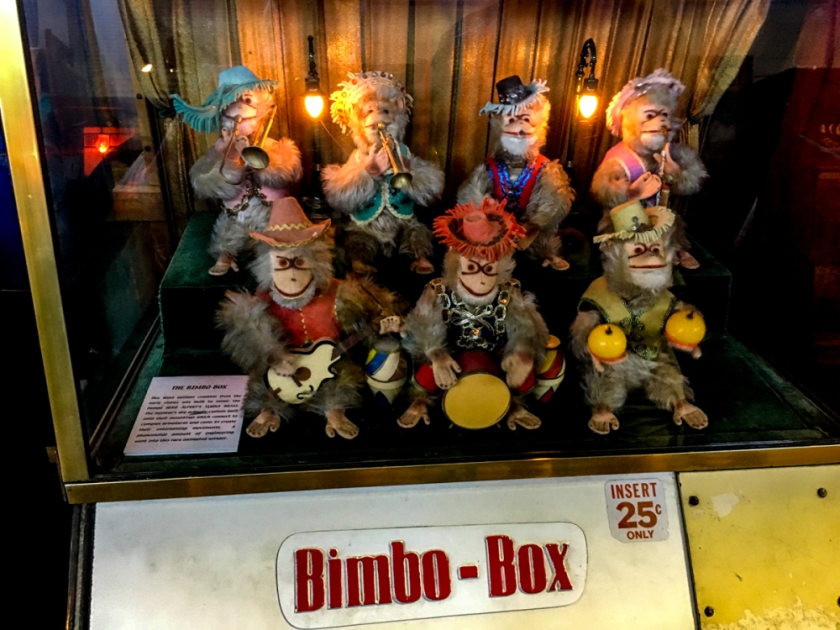 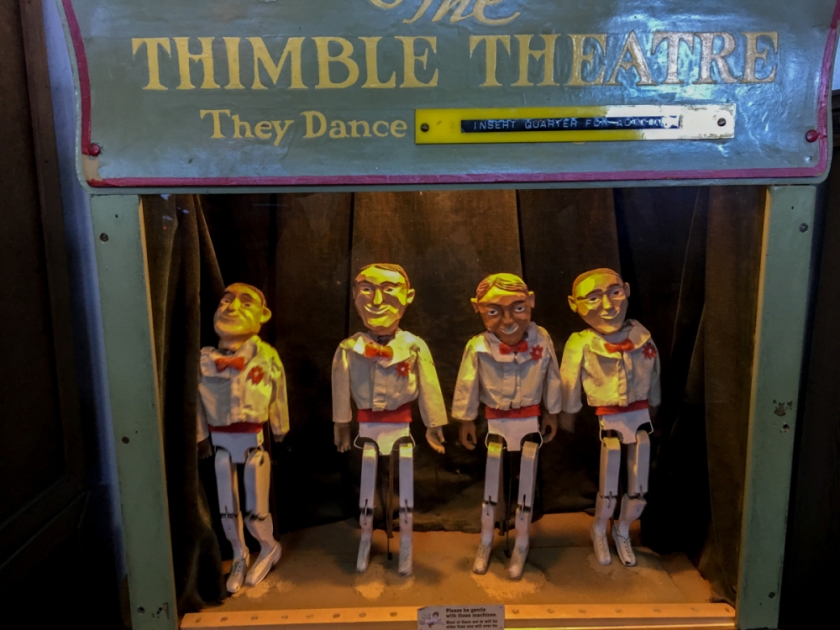 Then there was a submarine, the USS Pampanito in the water, outside of the Mechanical Museum building.  It was $20 each to go in. I didn’t feel like going so Clint went by himself and I sat by the water.

There’s lots of street performers downtown. We stopped and watched a couple of them play their music.

Then we went to a restaurant called Poseidon’s Grotto and sat outside and had clam chowder, corn chowder and bruschetta. It’s very expensive to eat here, but it was really good. 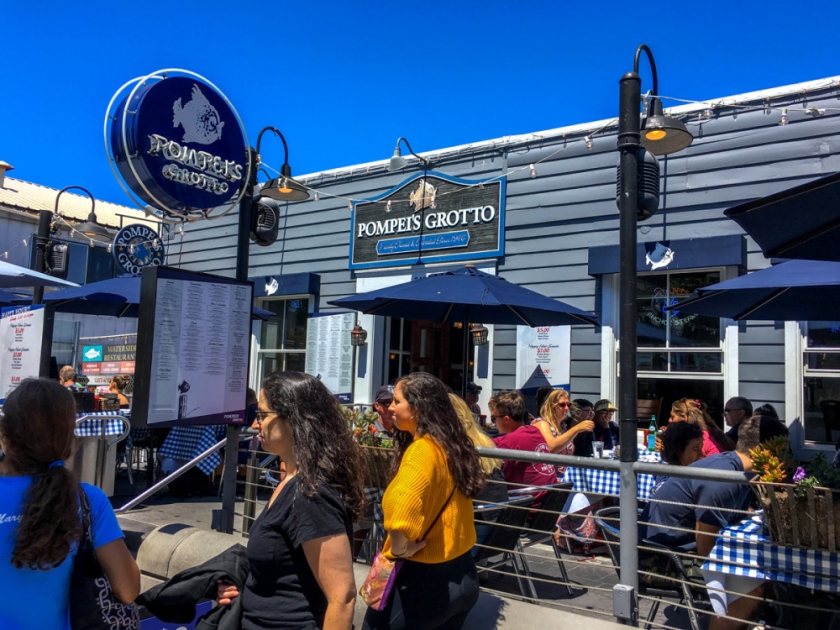 We drove up to Grace Cathedral and what a beautiful church, from the outside.  We had to park in an underground parking garage across the street from the Church and we paid $4 for 15 minutes to park.  This is a huge church but there is no ambience at all, it’s very sterile inside.

We left there and drove by the church, St Peter and Paul’s Church,that Joe DiMaggio and Marilyn Monroe had their photo taken at. Because he was divorced they were not allowed to get married in the church but they wanted their picture taken AT the church. We couldn’t get a place to park so we just kept driving past the church to get a couple of pictures.

There was no parking for blocks and blocks in every direction. Unbelievable how busy this city is, I haven’t seen anything like it.  Even the streets of L.A. were not this busy.

Then we drove to a Japanese tea garden to have tea but oh my God the cars, unbelievable, and no place to park there either.  The entire park was full of cars and people but it’s a beautiful spot.   We decided to head home, it was getting late and the later it got, the more people came out.

On the way home we stopped in Livermore and went to Shadow Puppets Brewery. This is a really cute little bar and we really enjoyed it there. We sat at the bar and had a drink, then we moved to a table and played trouble and backgammon and watched Chive TV. If we lived here I would absolutely go there again.