Wednesday 18 September –  nice day but only 10 Celsius. Now we’re leaving for Banff . The clocks went ahead one hour.  On the way to Banff,  we stopped in Golden, BC to get Clint’s Whistler Brewing Company Chestnut ale.

I think it was Tofino that he tried this beer but you couldn’t buy it there.  They told us the only place to get it was in the beer store in Golden so we had to stop.  Mission Accomplished and off we go!

Photos below are random photos of the drive from Revelstoke, B.C. to Banff, Alberta and all the areas in between. 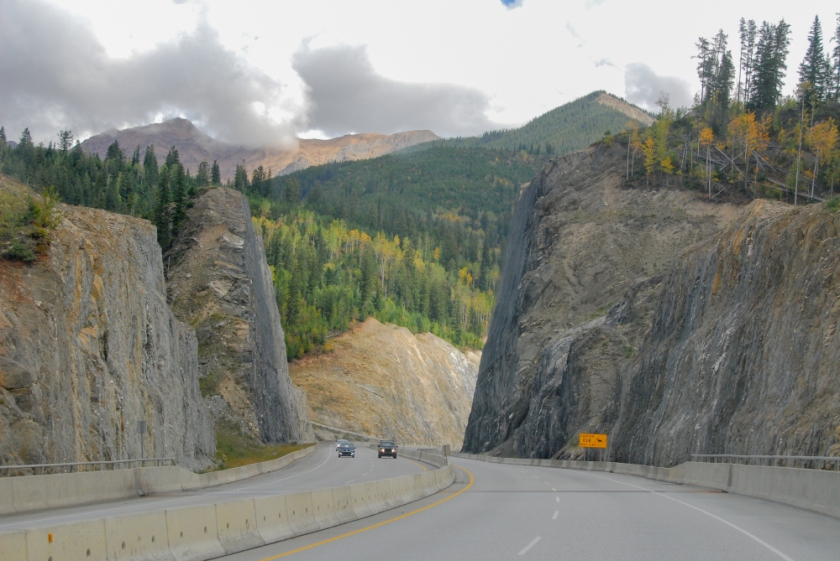 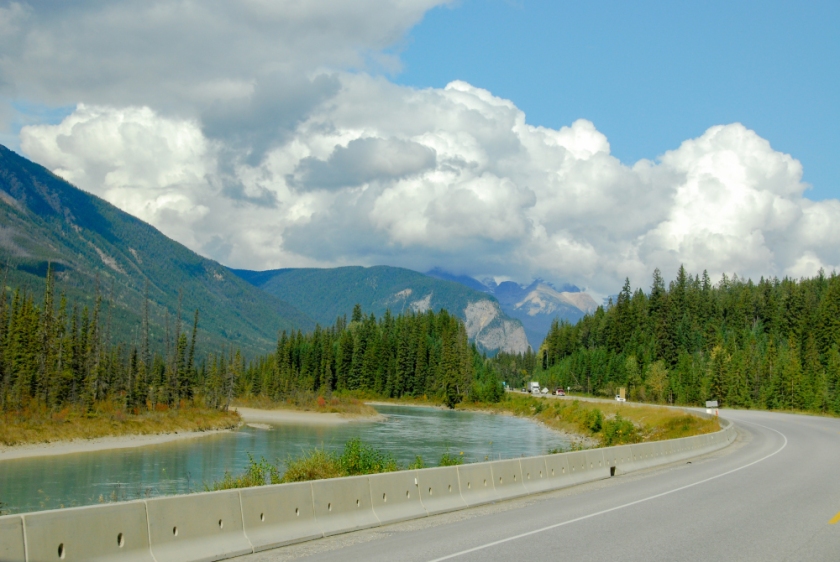 On the way, we spotted a herd of Big Horned Sheep sitting in a pull off at the side of the road.  We pulled over and got a few photos.  I love watching these guys… well girls actually.

We got to Tunnel Mountain Trailer Court about 230.  Banff itself is a National Park and the only campgrounds are National Park campgrounds.  We had site 532 which was a shared site. Not as bad as it sounds, we had our own entrances. It was shaped like a big horseshoe and with an entrance at each end, set parallel to the road. Hard to explain but it was a perfectly fine site and was $38 a night.  We stayed for four nights. We usually try to get a photo of each and every campsite we stay at, but we have been slacking off this trip.

After we set up we drove downtown Banff and parked.  Maybe a 5-10 minute drive from the campground.

We walked through the outdoor market which was pretty neat.  I was happy we arrived on Market day, I love going to Markets, so many things to look at.  While we were at the market, there was a booth selling these really cool growlers. They were from the Banff Brewing Company,  actually it was their booth !

So when we were finished at the Market, we walked over to the Brewery downtown.  You could buy the growler, filled with your choice of beer, for $55.   So we got one. We filled ours with Red Ale. We had awesome cauliflower and Korean barbecue wings and a buffalo chicken sandwich and pea soup. We shared it all but couldn’t finish it all. The sandwich was a bit tasteless but everything else was really good.

As we were walking back to the truck, we saw mom and baby deer grazing in someone’s garden.

This view is from literally just outside our campground.  So beautiful.

Thursday 19 September –  Sunny mostly and 15 Celsius.   This photo below was taken just outside of Banff.

We are  off to Canmore, Alberta.

They were having their Market day also !  Lucky me, I love going to markets.  We have been to this market before and really liked it.  We walked all around their market purchasing a few vegetables and enjoying the different booths.

Then we drove around the town afterwards just to check things out.  I wanted to see the Big Head! 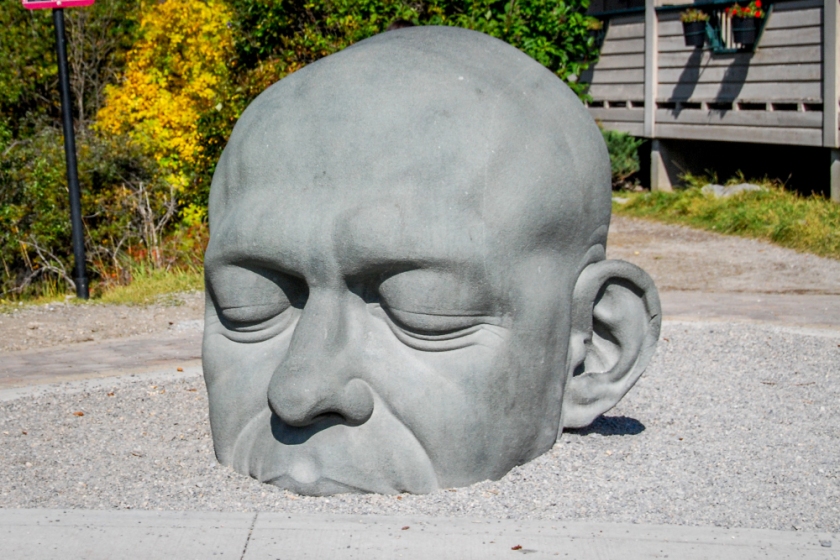 What the heck?……..you are thinking…….so here’s the story………Alan Henderson, an artist from Alberta, built this nine tonne sculpture.  The town of Canmore is named after Ceannmore, a town on the northwest shore of Scotland.  Ceannmore was named for King Malcolm III, who was also called Malcolm Canmore.  In Gaelic, Ceannmore means “big Head”.  Phew………There’s an explanation for you!  So there you have it………..the Big Head Story.  I’m not gonna lie, still weird.

Off to Grizzly Paw Brewery, the actual brewery, because they also have a bar/restaurant downtown.  The brewery is downstairs and they now have a restaurant upstairs. It’s a beautiful building and they had a really good IPA. Had a beer and a nice chat with the young girl working there. 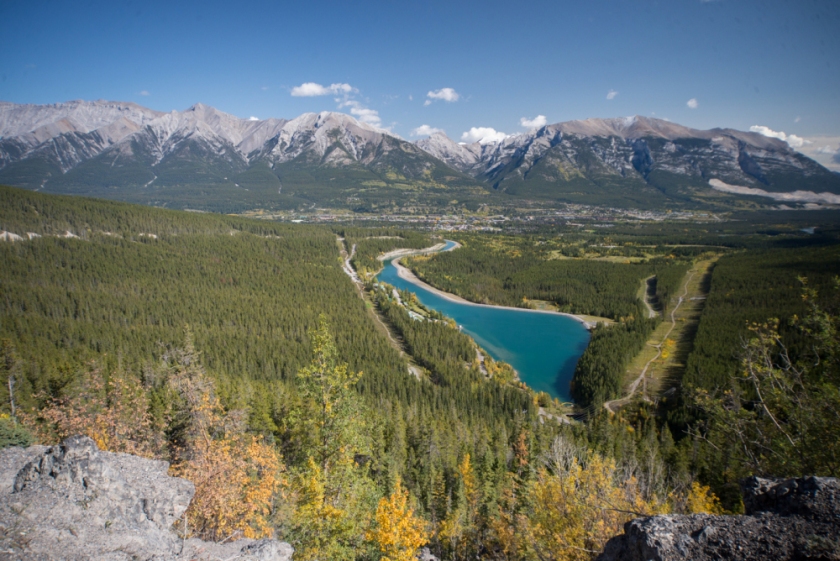 At the intersection of this Road and Highway 40 we saw a herd of female and young Bighorn sheep. We stayed a long time taking photos. 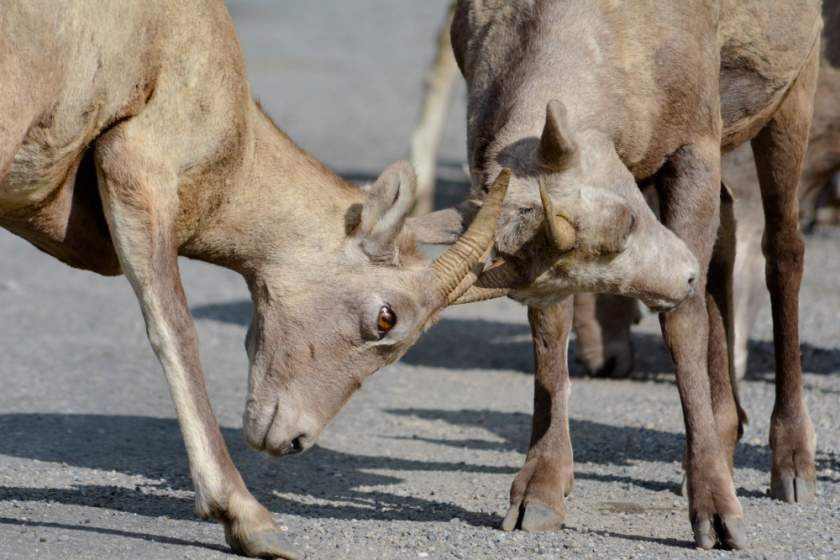 Also as we were driving, Clint spotted a wolf or coyote on the Spray Lakes Road, he wasn’t sure as we were just driving by and by the time we stopped, he was gone.  That would have been nice to see.

Somewhere outside of Canmore!  So many photos, so many places, my mind can’t process them all.

Friday 20 September –  Sunny and partly cloudy 10 Celsius. Off to Johnson Lake and Lake Minnawanka. We saw a mom and a baby Bighorn sheep on the side of the road. We also went to the Cascades pond for a look. We got to Lake Minnawanka, this is a lovely spot, we stopped here last time we came out west.

On the Lake Minnawanka Drive, we stopped at Cascades Pond park. What a nice spot.  We spent quite a lot of time here, walking around and taking photos.

We drove around a lot of the campgrounds to take a look and then to downtown Banff.  We parked and walked to St. James Irish pub for lunch and had fish and chips and I had chicken, bacon, leek pie. Pretty good food. 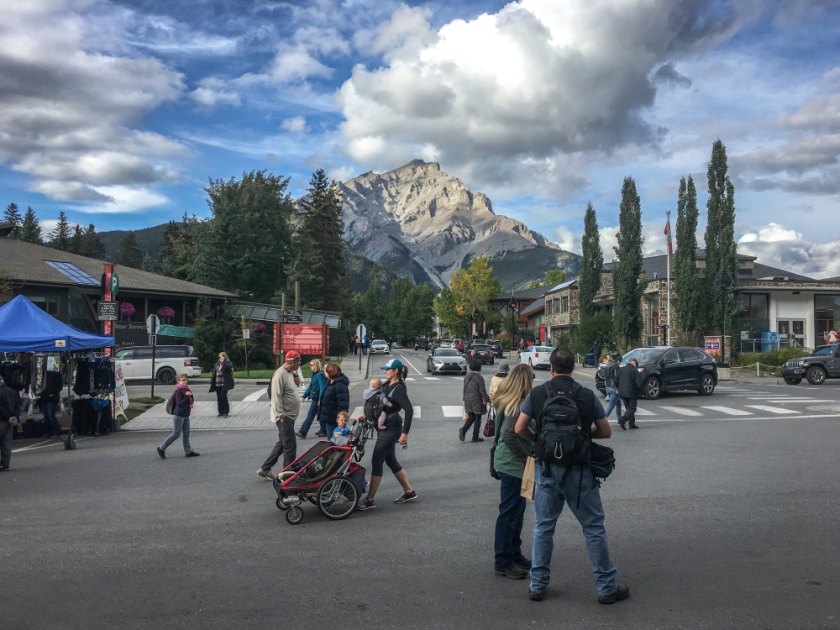 Then we drove to Vermillion Lakes and then we drove the Bow Valley Parkway. We got caught up in construction on Highway 1A and it was closed at Johnson Canyon so we had to turn around and drive back the way we came.   There is a lot to see on the Bow Valley Parkway, like Castle Mountain.  Very unique mountain formation.  This is also where there was an Internment Camp, consisting of mostly Ukrainian and Hungary men, during WW1.  Interesting history.

On our way home we spotted a herd of elk and one big male in our campground.

We wanted photos of the big male so we followed, at a distance.   There were also three deer at a someone’s trailer eating bushes by their trailer, in our campground. So funny. We also saw more deer downtown Banff.  I love this area.  But……..back to the Elk.

The video below is very short, 20-25 seconds long.  Turn your sound up and wait until the very end.  The sound this Bull Elk makes is eerie, it’s his mating call.  Sorry the video is dark, it was late in the evening;  he was in our campground.

Saturday 21 September 18 Celsius today and sunny!  We left super early to go to  Moraine Lake and Louise Lake; the parking lots were full of people and even though we got up at 6 o’clock to go to, they were packed. Too many people and cars, so we decided to forego them.  We have been to both before or we probably would have done them.  I forget where exactly, but they have the wildlife bridges here.   We also have one in Ontario.  These are great, they encourage wildlife to walk over the highway instead of on it and yes, research shows a significant decrease in road kills.

So we left there and went to the town of Field and we saw some Elk by the side of the road.  Of course, we stopped to get photos 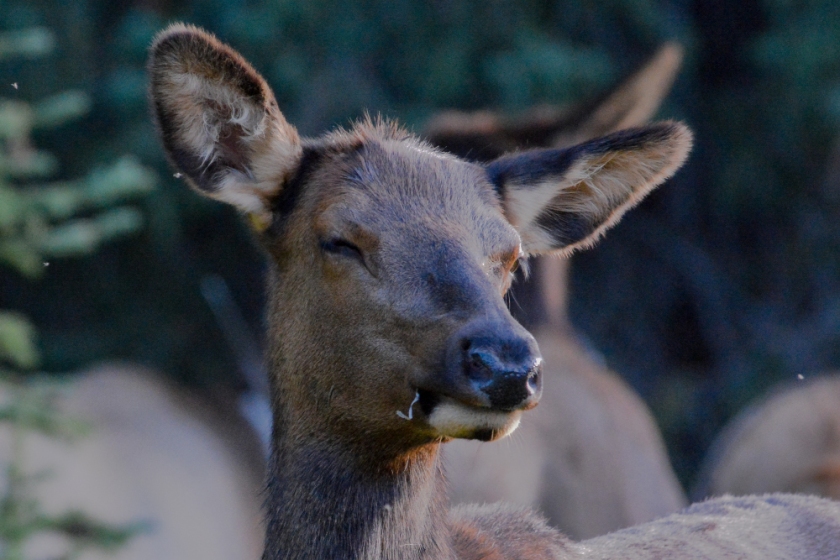 Then off to the Natural Bridges area which is an area that I really like.  We have been to a lot of these spots before and I would come here again and again.   It looked different this year, it did not look the same.

Then we went to Emerald Lake and met a  young girl from Ontario there. She is moving out here and she was just here for a job interview.  We spent a long time chatting with her by the shores of Emerald Lake.

On the way to Yoho National Park, B.C.

On the way out of Kicking Horse campground we noticed these holes and ladders way up high in the mountains.    Men used to climb up the sides of the mountain with all their gear and go inside and mine.  How crazy is that?

Then on to Takakkaw  falls.  This is a beautiful spot. Great photo opportunities here.   We walked from the parking lot up to the Falls and hung around for quite a long time.

We left there and on the drive out, we stopped at the Confluence of the Yoho River and Kicking Horse River.  We parked and got some photos and then clambered down this steep hill to get to the river and cascades at the bottom.  There were a couple of other people there, people are all over the place !

While we were standing there we saw a little Pica, kind of looks like a mouse. Really cute. We headed back to our campground and then drove around looking for the elk and we found them.  They are quite fascinating to watch.

Off to Medicine Hat, Alberta tomorrow, making our way home.