I finally found my Pelicans !  We had been told there were pelicans at Caliper Lake Provincial Park Ontario.  We did not see them; not saying they weren’t there or would never be there, but they were not there when WE went.  But if you go to the Red River Dam near Lockport, Manitoba, then Holy Pelicans !  There they were; hundreds of them, all fighting with the cormorants and fishermen for fish.   They are pretty cute and look a tad prehistoric !

We spent a lot of time photographing the Pelicans.  So cute and they liked to bunch together on the shoreline which made for an even cuter picture.

Who would have thought there would be pelicans in Canada?  I sure didn’t but when we were in Florida a few years ago at a pelican sanctuary the tour guide told us Yes Indeedy! there are Pelicans in Canada. 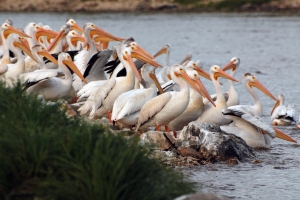 We stayed at Birdhill Provincial Park which is close to the city.  Nice park but be prepared to pay for the showers.  Not a big deal but just so you know !  This is the first time we had to pay for showers that weren’t in a private park.  It’s a nice park but we didn’t spend as much time there as we should have as there was too much to do in the area and in Winnipeg itself.

We went to the Aviation Museum which was well done, nice displays and interesting history.  Spent a couple of hours there.

The Forks which is located in Winnipeg on the Red River. It’s a great space with lots of shops and restaurants and a brewery on site.  And you know how I feel about breweries ! You can purchase tickets at a booth by the water and take a tour boat on the Red River with a tour guide.  Our guide was terrific.  He told us about the history of the area and local attractions and we toured down to where the Red River and Assiniboine River meet.  There is a foot bridge (Provencher) going over the river with a restaurant on it that probably has the expensive washroom in the world on it !   I can’t remember the exact cost but something like a million dollars comes to mind.  If you think about it, it would cost a lot, a washroom on a bridge over a river.  Where does everything go?   You know what I mean…

The Human Rights Museum is also a good place to tour.  The displays were so well done, a lot of good reading there and things to learn.  A must see if you go to Winnipeg.  We did find the architecture a little odd. The inside of the building was so open and they had wide cement ramps going back and forth from one side to the other.  Seemed like a lot of wasted space but I would still go tour it again if I ever get back to Winnipeg.  They told us it costs approximately 25 million a year to operate, probably hydro for all that open space. That’s supposed to be funny………….. 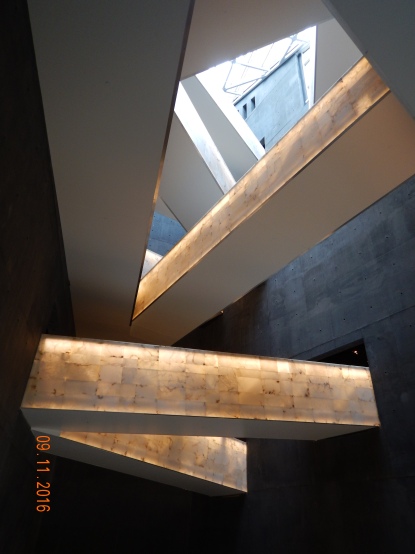 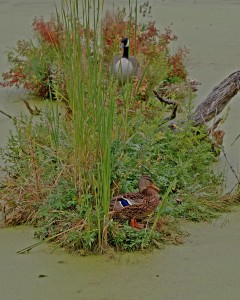 Fort Whyte Alive !  They added the exclamation point, not me !  Okay so I added THAT one.

We went to the zoo while visiting Winnipeg.  I know there are differing opinions of zoos.   It would be nice if we didn’t need them but I think we do.  They are, in general, dedicated to keeping species going; they have breeding programs; educational and information aspects.  But do I think animals should be kept in cages all their lives?  No I don’t but I do see the need and there is an upside for the animals and for people too.  Having stated my opinion, I will say this zoo is incredible.  The spaces are large, the displays superior.  All in all, it was great afternoon learning and visiting.

Other points of interest that we went to or drove by – Exchange District; French Quarter; St Boniface Church; Legislative Building.