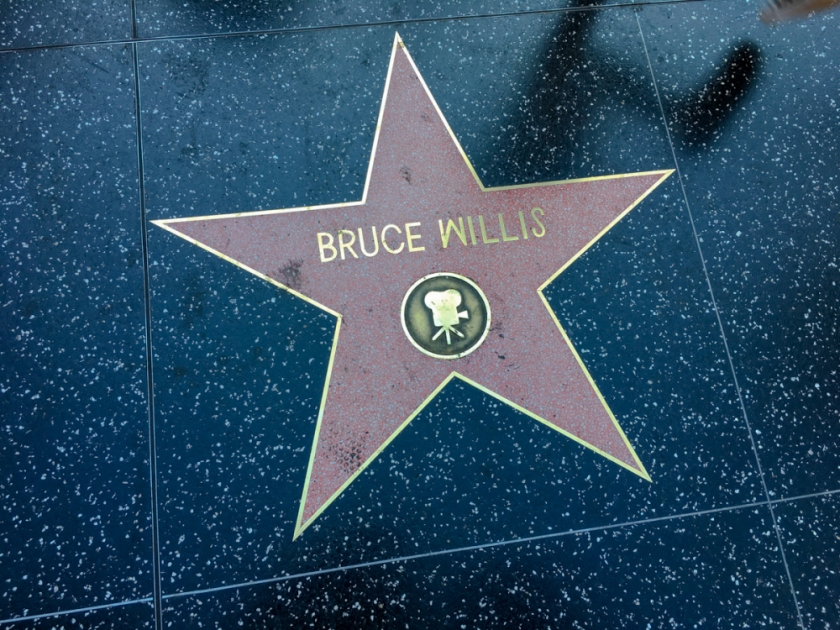 Monday 22 July –  Sunny 32 Celsius. We left about 9:30 in the morning for Los Angeles. We stayed at Bonelli Bluffs in San Dimas at site number F100. It was $368 for seven nights.  This is a  huge park and they have 583 sites. They also have a kid pool and an adult only pool.  Hurrah!  The park is very clean and very well maintained and there are some permanent residents here. Our site was small but we have a little bit of grass and a tree! It was pretty nice actually.  There was a long steep hill to get down to our part of the campground but there’s a nice lake at the bottom.

After we set up we drove the 35 mile scenic Angeles Crest Drive.  It was a really nice drive, winding roads that went up into the mountains.

Then we stopped at No Clue Brewery in Cucamonga. It was a very small place but they had really good beer and the taster trays were in the shape of a question mark.  Pretty cool marketing. They had excellent Wi-Fi so we stayed a long time catching up on emails and other terribly important Social Media stuff, lol.

Then it was off to Old Stump Brewing Company.   It’s a huge big place and has a big outdoor area. We stayed for quite a while, sitting outside on their huge patio.  We ended up getting tacos from the food booth that was on their patio and a couple of beer.

We ended up going across the street to a Brazilian restaurant called Bossa Nova. We had lunch there and it was chicken, beans, rice, plantains…….pretty good lunch. While we were sitting there we saw Tom Sandoval walked by carrying a change of clothes, as they were filming today. 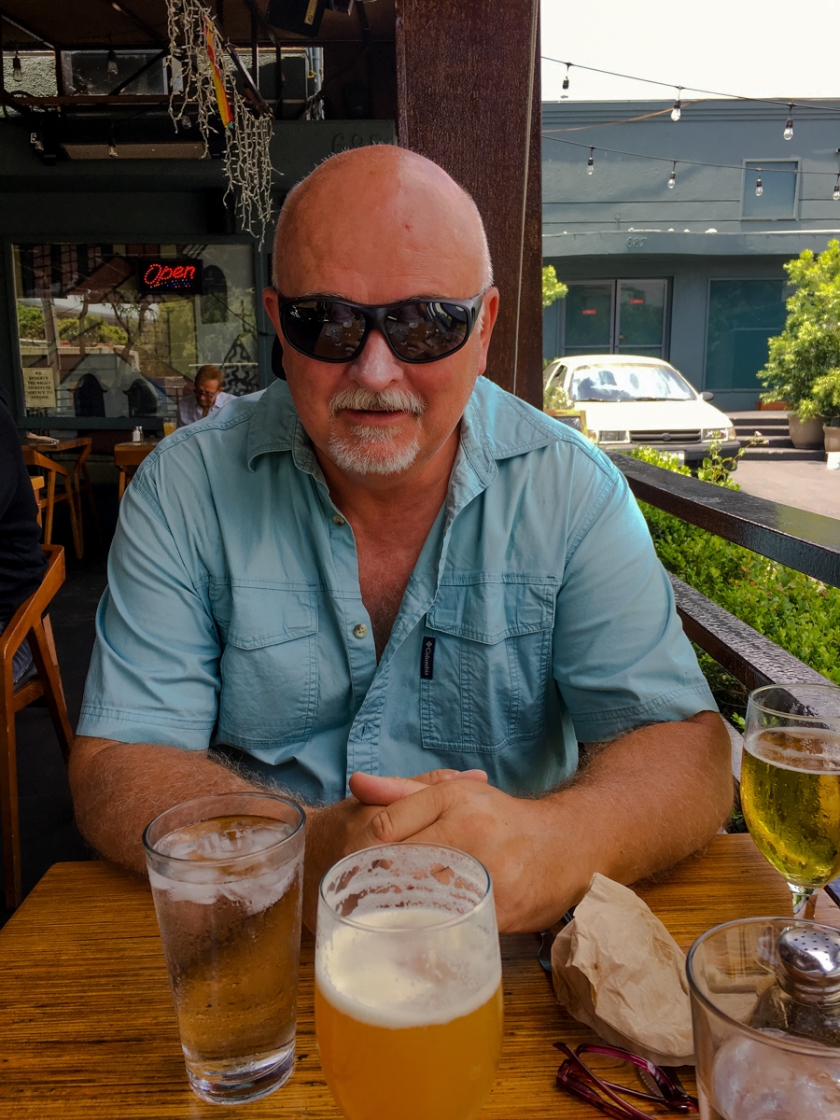 We left there and drove to Hollywood Boulevard and took a two-hour bus tour all around the city. We went to Beverly Hills, Rodeo Drive, Sunset Strip etc. 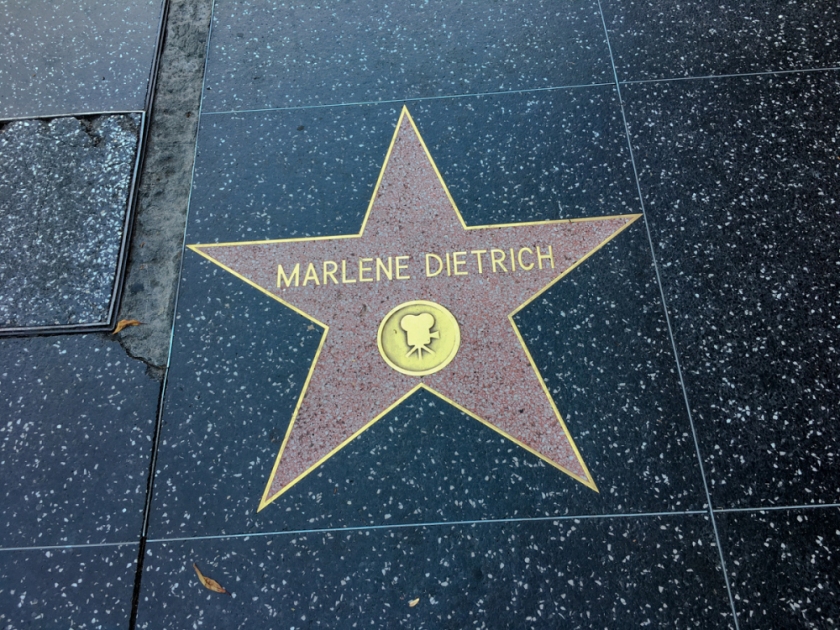 The Witch’s House (below) also known as the Spadena House.  It’s a storybook house in Beverly Hills located on the corner of Walden Drive and Carmelita Avenue.  And yes, someone lives there.  Apparently it is fantastic inside. 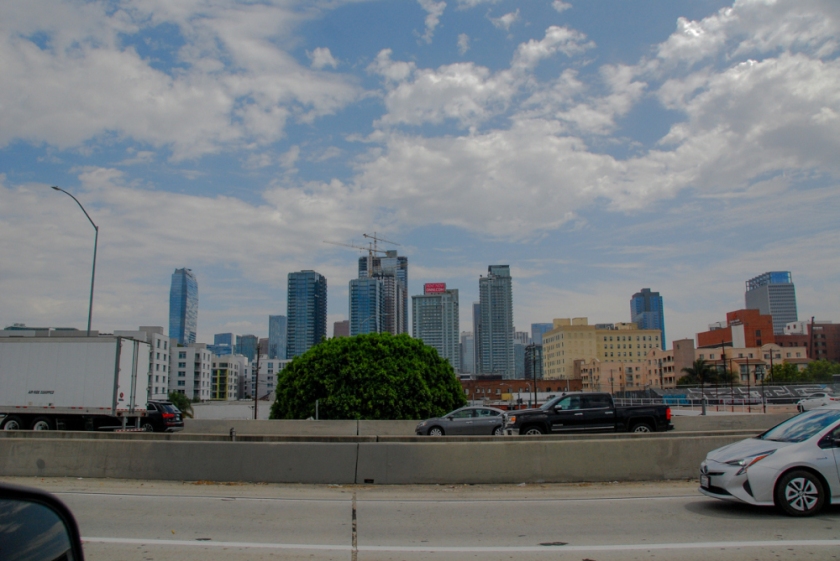 When we finished our tour we walked around downtown and saw the sidewalk stars. We stopped at the Chinese Grohlman theater and I wanted to see it but the people at the ticket counter were really rude so we didn’t go in.  We asked them to give us a quick blurb on what was inside, price etc.  The two people working were chatting with each other, about their social life.  She nodded at the brochures and said “Read That”.  And then went out of their way to ignore us as we stood there like idiots.  Clint told them he didn’t like their attitude and we walked away.  I know they didn’t care but whatever……pretty poor customer service though.

We drove back to Sur and sat at the bar for 10 minutes. They didn’t acknowledge us or come over.  I’ m beginning to see a pattern here, let’s ignore the senior touristy Canadians lol.    So again, we just said to ourselves “screw this”  and left.  I’ve been ignored by better people than them lol .   Plus there’s a ton of bars and restaurants around here.

We  walked down the street to Tom-Tom’s. We got a cute table near the front and I had a beer and Clint had a drink called the Kentucky muffin which was really good and I don’t drink liquor so trust me, it was REALLY good. We also had 3 Tom’s tacos and cauliflower wings. Really, really good food here.  Met a couple of guys sitting at the next table and we had fun talking to them.   They were Gay and when we left, we stopped at their table, still talking, and one of them said, ” What are two heterosexual people doing in the Gay part of L.A.?”    I don’t know……….Eating? Drinking?  Take your pick!  We didn’t know, nor did we care, that it was considered the Gay part of L.A.  All I know is that we really enjoyed the restaurant and really enjoyed our visit with these two guys.  It was a fun evening.

Oh yes I forgot to mention, this morning while we were having our coffee outside our trailer, 3 Muskovy ducks came by and hung around. Also a skunk has been hanging around.  Not real interested in seeing him up close.

Wednesday 24 July – Sunny and 33 Celsius. It was a late morning, we hung around the park catching up on laundry  and tidying up the trailer.

Then we left to drive to see the Queen Mary ship.We were there for about five hours. It was $40 each to get in and $20 to park. This is a beautiful ship and was quite something to see. We did a guided tour at 3:15 and then we saw a movie on sharks and a movie on the Queen Mary.  The movies were good and this is a very interesting place, and beautiful.   We really enjoyed it.  There is a lot of history to this ship and quite an interesting read. 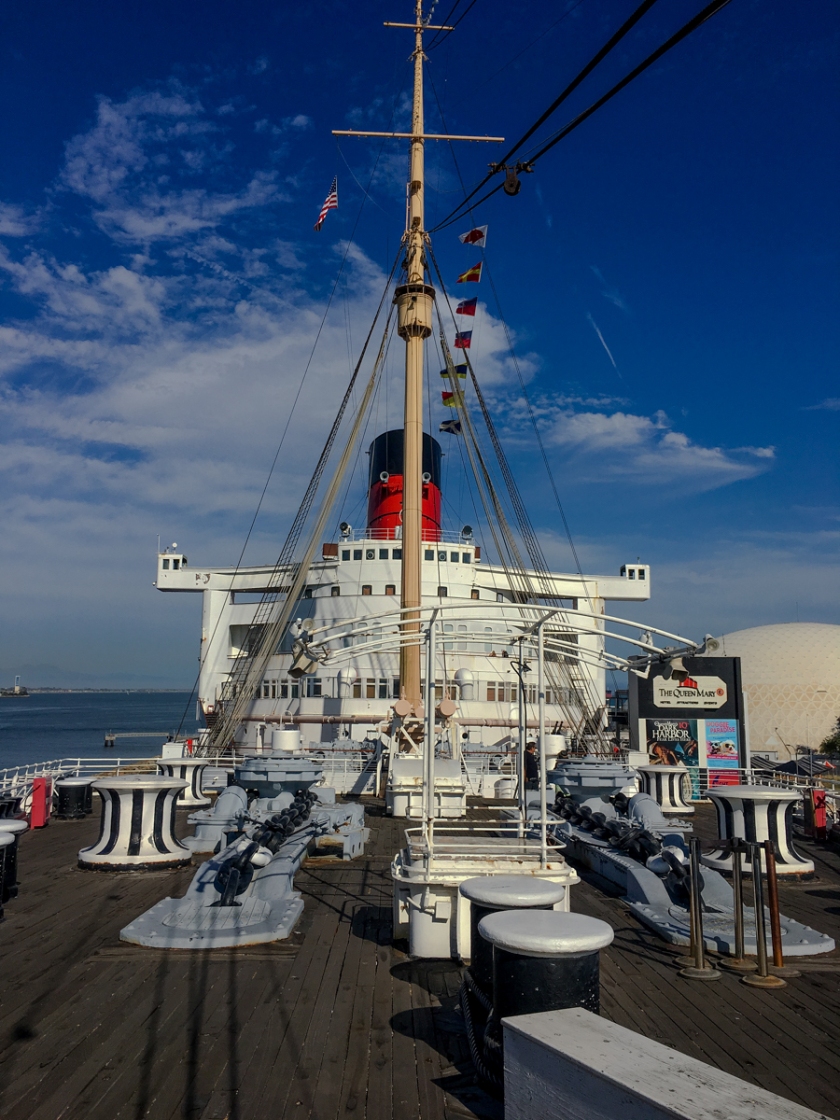 We left and went to the Long Beach beer lab, had a sip of a couple of beers and then ordered a glass of beer each. Pretty good IPAs and then we ended up ordering a margarita pizza. They make all their own bread and pizza dough here. They also have strawberry pies which were tasty.  The  young guy was a really good bartender and I liked the atmosphere.

Thursday 25 July –  sunny 34 Celsius. We got up and on the road super early to go to Paramount Studios. We left at 6:38 and got there at 8 o’clock. Stopped at a McDonald’s for breakfast and then went to the parking lot which cost $18 but not for the day.  The man who runs the parking lot knows the tour times so when you are done, you get your car out of the lot.  When we came out later on, the lot was beyond full, he spends all day manipulating cars around the lot. We had to leave our car keys with him, it’s quite an operation. We went into the building at 8:54 for our 9:15 tour.  They were all excited that we were Canadians and they told our tour guide how lucky she was to have us as guests.  No I’m not making this up.  They probably heard about us.  lol

We watched a short clip and then a girl named Dagny took us and two other people on a golf cart for two-hour tour. We got off here and there but we really didn’t see anything exciting. All in all was a pretty boring tour. We did go by the building that Lucille Ball would stay in when she was filming there. There was a little park outside of it

We drove through the famous Hollywood Forever cemetery and then walked around a bit looking at tombstones,  I know, a little morbid. But this cemetery was something else.  The memorials and monuments were unbelievable.

We were done there about 11:30 and got our truck and off to the Griffith Observatory. It was $10 an hour to park so we put in $20. But we still had to walk 25 minutes all uphill to get to the observatory.  Good exercise! 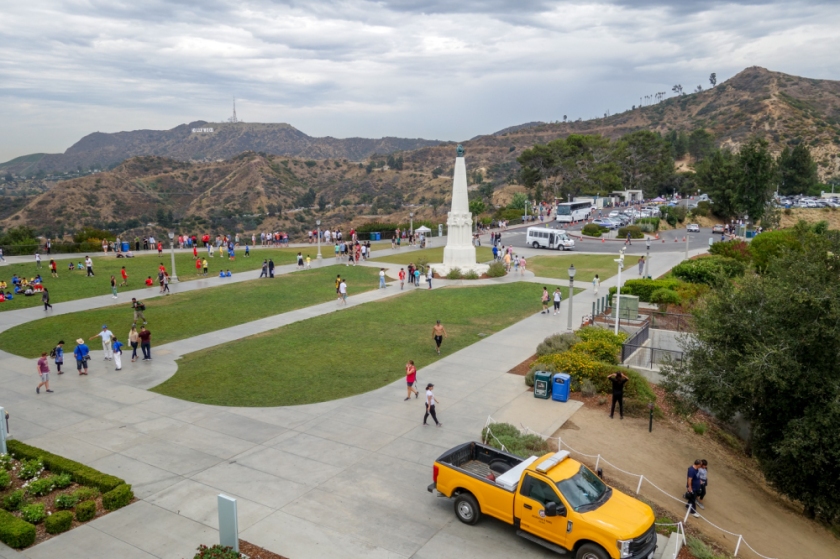 What a great place, we watched a 25 minute movie narrated by Leonard Nimoy and then we toured the building.  Everything here is planet, star and space related.  Quite a cool place and the view of LA was pretty awesome.  We could see the HOLLYWOODsign. We left and it took us only about 17 minutes to walk back down the hill to our truck. After that we drove to Venice Beach and Santa Monica pier. Cost us another $20 to park. We just walked around the beach area and sat at a  bar and had a beer and some sandwiches.

Friday 26 July    –  Sunny 35 Celsius.  I needed a down day so we sat around reading books all morning and then we made ourselves a big breakfast.  About 1:30 we packed up some beer, towels and books and headed to the adults only pool. We were the only ones there for 90 minutes or more. Then some old weird lady came in and two drunken women and an older guy. I have to say, it was  pretty entertaining watching them and listening to them.  Nice, slow relaxing day.

Saturday 27 July. I woke up with a  bad sore throat. Feel sorry for me, I did.   We were meeting Clint’s cousin,Kylie in Riverdale about 2 o’clock. So off we went to her house and Clint’s Aunt was there too. We had a visit for a couple of hours and  then we went to San Dimas and met Kylie’s brother and his fiancée at a restaurant called Heroes. Before we met them, we parked and we walked down to the mission which was just a big hotel.

Sunday 28 July  stayed in bed all day, I was very sick and didn’t leave the trailer.

Off to Buelton, California tomorrow, me and illness………………..