Here we are in Algonquin Park again!  My favourite place.  We are camping here later than we normally do because of our Big Trip.  We usually come mid to later September and stay through the Canadian Thanksgiving.   For this trip, we were only home about 10 days and then packed up and left again for Algonquin Park.

We spent the first 4 nights at Lake of Two Rivers Campground and the rest of the time, we had a great waterfront site at Mew Lake Campground.

We did lots of hiking and driving around looking for wildlife.  We saw some, but not a lot!  It is getting a little more difficult to spot wildlife in the Park, there is so many people.  But we will keep on trying.  This Blog post is going to be primarily photos.

One day we walked the Booth Lake Trail, it’s a beautiful trail.  We spotted the biggest hornet, or wasp, nest I have ever seen.  And it was hanging so close to the lake, which I thought was odd.  It was really windy but I guess they didn’t care.  And yeah, they were still in it.

We hiked over to the old ruins which used to be the Barclay Estate.  Pretty cool spot.  We walked down to the water and saw the oddest thing.  Someone had dumped a small rubber duckie into the lake.

We did a hike another day and it took us to a great overlook of  the park.  There were some nice rocks to sit on and just breathe it all in.  The last time we hiked this one, we took our lunch and it was really nice.  It’s chilly but the sun is out so it’s actually quite lovely to hike and not sweat lol.

One day we spotted a heron in a little pond on the side of Hwy 60.  We spent a long time taking photos of him.  I was able to get really close and watch him catch and eat fish.

One day we drove into Huntsville.  This is a great town and an obvious “cottage country” town.  Lots to do here and they have some cool stores, including Algonquin Outfitters.

They have a couple of restaurants on the water and you can dock your boat and have lunch.  There is also a brewery downtown, not that I’d be interested…………..kidding.

When we got back to the Park, it was spitting rain and we spotted two moose on the side of the road.  A cow and her young one, who was a baby bull!

View from the beach at Lake of Two Rivers one morning.

Some random photos of some roads we drove and/or trails we walked.

And just one more of the moose! 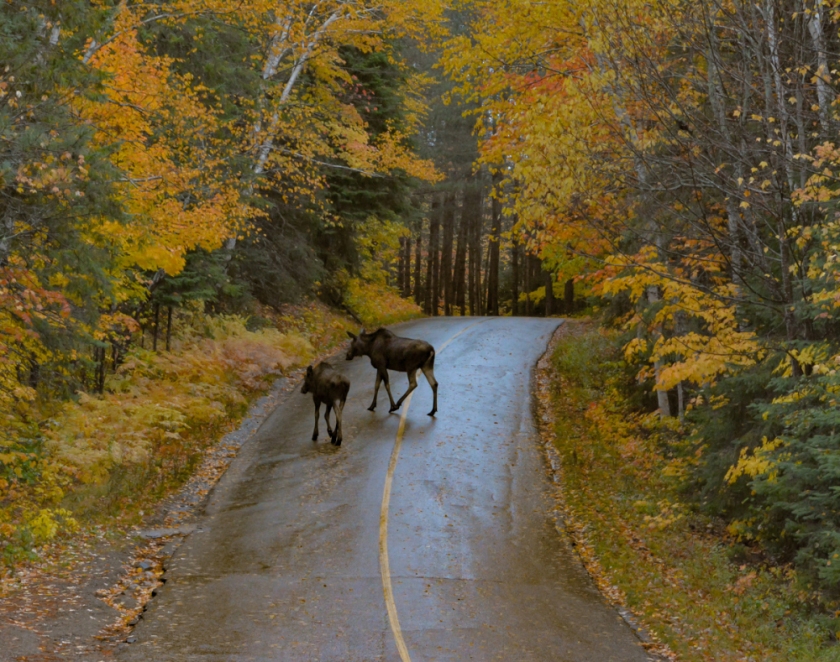